Browse the article What is the emission certification standard? 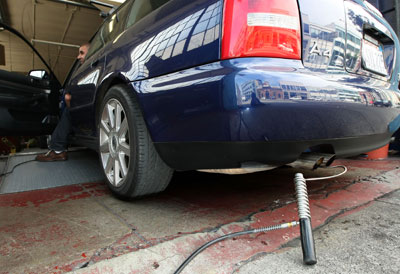 Eco-friendly automobile owners are becoming increasingly concerned about what's coming out of their cars' tailpipes. When an engine burns fossil fuels, it emits a wide variety of potentially harmful substances: carbon monoxide, greenhouse gases, sulfur oxides, nitrogen oxides, hydrocarbons and so on.

What do those substances really mean for the environment and our health? The news isn't good: Carbon monoxide makes it harder for the blood to carry oxygen and can cause heart and lung disease. Sulfur dioxide can cause acid rain. Nitrogen oxides cause the yellowish brown haze that hovers over crowded cities. Carbon dioxide can lead to the dreaded greenhouse effect -- the trapping of gases and heat to make the atmosphere warmer than it should be -- and hydrocarbons can cause cancer [source: Electric Auto Association].

In other words, we're all driving around in machines that are destructive to our health, our environment and -- as many scientists believe -- are heavily contributing to global warming.

We're still a few years away from having affordable and readily available cars on the road that expel no harmful emissions, like hydrogen fuel cell or all-electric vehicles. Until then, there are a few things that all of us can do to cut down on fuel consumption and car pollution. For example, we can focus on fuel efficiency and eco-friendly driving by buying low-emissions vehicles and making sure our cars pass the yearly emissions inspections mandated in many states. These inspections test your car's safety features and mechanical state, and they also make sure your car's not polluting too much, which is especially important for older cars that lack today's modern emissions-control technology.

Because of the dangers they pose to the environment, vehicle emissions need to be closely controlled and monitored to keep the atmosphere above our roads and cities from filling with smog. For this purpose, the federal government and some states have established emission certification standards -- regulations that govern the amount of harmful emissions that vehicles can lawfully release.

In this article, we'll discuss how the emission certification standards work and learn more about green driving.

After the end of World War II, Americans began moving en masse out of the cities and into the suburbs. These new suburbanites needed cars to make their daily commutes, and the nation soon started motoring on an unprecedented level. Along with the increase in cars on the road came an increase in fuel consumption -- and an unexpected rise in air pollution. California became the first state to establish clean air standards, due in part to the region's heat and natural topography that traps smog over congested cities like Los Angeles. By the 1940s, residents had already begun to suffer from watery eyes and respiratory problems as a result of the added pollution [source: Melosi].

By the 1960s -- at the objections of carmakers -- California began requiring various emissions control devices be placed on cars. This is what led to the advent of catalytic converters and the demise of lead-based gasoline. In 1970, President Richard Nixon signed the Clean Air Act into law. This act gave the federal Environmental Protection Agency (EPA) the authority to protect and improve the nation's air quality [source: EPA]. The Clean Air Act led to declines in carbon monoxide, hydrocarbon and nitrogen oxide emissions [source: Melosi]. The act has since undergone a few revisions -- several major revisions in 1990 and some minor ones in the years since.

The 1990 act proposed two national "tiers" that spelled out exactly how carmakers must reduce emissions. The Tier 1 standards went into effect in the mid-1990s, and are currently being phased out for stricter Tier 2 standards. Under the Tier 2 rules, SUVs, pickups, vans and large passenger vehicles are subject to the same national emission standards as cars. It also mandates the use of low-sulfur gasoline that will allow cars to run cleaner and says that diesel engines must abide by the same emissions standards as gasoline engines [source: EPA].

California's emissions standards are stricter than the federal ones. States can choose to follow the California standards if they choose, and several do. Cars are classified according to a number of acronyms:

On the next page, we'll examine how automakers comply with federal and state emissions regulations to help promote fuel efficiency and green driving. We'll also learn how eco-friendly driving technologies can help us reduce our carbon footprint. 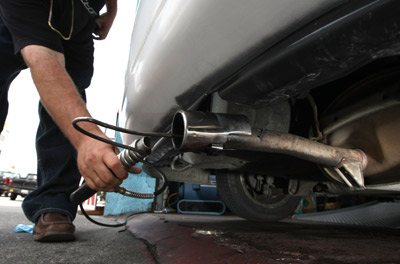 Want to make your car greener? Make sure it complies with your state's emissions standards.
Justin Sullivan/Getty Images News

Under Tier 2 standards, vehicles are divided into emissions standards called bins. There are 11 bins currently, ranging from 1 (the cleanest vehicle) to 11 (the most polluting). A bin 1 vehicle is equivalent to a zero-emission vehicle; 5 is the average car (all new vehicles must meet this standard for nitrous oxide emissions) and 11 is applied only to very large trucks [source: GreenerCars.org]. Under Tier 2, light duty trucks like SUVs are also subject to the same emissions standards as passenger cars, regardless of weight.

So, how do you make your car greener? There are several ways.

First, find out how your vehicle is classified according to the emissions standards. An automaker's website will probably have this information, and many cars have the emissions rating on a sticker in the window. All newer cars, however, have a mandatory label under the hood that identifies the emission standard.

Second, get your car inspected each year and make sure it complies with your state's emissions standards. During the inspection, a mechanic will place your car on a dynamometer -- a kind of treadmill for a car that lets it travel at different speeds while staying in place -- with a device hooked up to the tailpipe. Your car will fail the test if it releases an overly high amount of hydrocarbons, carbon monoxide or nitrogen oxides [source: Texas Department of Public Safety].

Besides the fact that the law in many states requires drivers to get a yearly inspection, and that the auto shop will make sure your brakes and other mechanical and electrical components are working correctly while you're there, this test will keep you from driving around in a smog-spewing clunker. What's more, these cars usually get better fuel economy, so you don't have to worry as much about wasteful fuel consumption on the road.

For those looking to purchase a new car or a recently built used car, there are many models available with low emissions in mind. For instance, the Toyota Prius is a bin 3 car, while the Honda Civic Hybrid is even lower at bin 2. Ford's Escape Hybrid is a bin 3 vehicle, which is an impressive rating for an SUV. Under the tough California emissions standards, the non-hybrid Toyota Yaris and Honda Fit are both considered Ultra-Low Emissions Vehicles [source: GreenerCars.org].

Someday we just may all be driving electric or hydrogen-powered cars that don't emit chemicals that harm our health or the environment. But until then, we'll simply have to make do by maximizing our car's fuel efficiency, by learning as much about green driving as we can, and by making sure our older cars don't pollute too much.

For more information regarding emission certification and eco-friendly driving, take a look at the links on the next page.