by Matt Cunningham
Prev NEXT
9 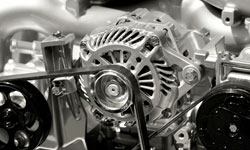 Turbulence in a car engine's airflow can greatly affect the engine's efficiency.
iStockphoto/Thinkstock

The internal combustion engines in cars and trucks are essentially large air pumps: The action of the pistons sucks in a precise mix of fuel and air, which is then ignited and vented out through the exhaust. The energy of the burning mixture forces the engine to suck in more of the mix, repeating the cycle. And this next piece of fuel-saving quackery plays off misunderstandings about that process.

Engineers pay close attention to airflow into an engine. The amount of turbulence in the flow can affect how fuel and air mix as they enter the combustion chamber, and this can impact an engine's efficiency. The creators behind intake vortex gadgets often claim that their devices alter this airflow in a way that improves fuel-to-air mixing, improving fuel burn and consequently getting more mileage out of each gallon [source: Allen].

The main warning flag with vortex generators is that they're actually based on antiquated engine technology. Automobiles built before engine management computers became commonplace did rely on the shape and length of intake bodies to manipulate fuel and air mixing. But modern vehicles have computers that constantly adjust fuel flow to match airflow: Create a turbulent airflow in the intake (as a vortex generator does), and the car simply adjusts the amount of fuel it injects [source: Tony's Guide to Fuel Saving Gadgets]. The result? The car may actually run worse, since it's compensating for altered airflow by altering the fuel flow. The computer's fuel-flow rate is calibrated at the factory to provide the right amount of fuel for each combination of driving speed and engine load. Alter this, and you're more likely to hurt performance than improve it [source: Allen].