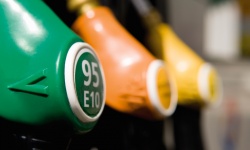 Biofuels, made from crops such as corn, can have negative economic and environmental effects, as well as positive ones.
PhotoAlto/James Hardy/Getty Images

"Biofuel" is a major buzzword in transportation circles these days, and for good reason. Plant-based fuel can be produced almost anywhere, comes from a renewable resource and often produces cleaner emissions than petroleum-based fuel. With international trends swinging toward sustainable transportation, fuels such as corn-based ethanol and biodiesel from soy, switchgrass and palm oil seem like a good step toward cleaner, greener highways.

But biofuels aren't completely cost-free. A number of factors play into any fuel's cost, both in economic and environmental terms, and biofuel doesn't always come out as the most sustainable option. True, a plant-based fuel comes from a renewable source, while fossil fuels will eventually run out. But factor in a number of other complicating aspects, and biofuel often carries a heavy price.

Many common crops could economically produce biofuel in certain parts of the world. But in other regions, the same plants would be impossible -- or extremely costly -- to grow. Likewise, the fertilizer, water and land required to produce enough biofuel to reduce fossil fuel consumption significantly can create other problems, ranging from increased pollution to decreased access to food.

Biofuels, and the process of integrating them into our fuel use habits, can be costly. Let's look at some of the drawbacks of biofuels and gain a new perspective on the fuels we may see more of in the future.