Green Driving Tip 3: Another One Rides the Bus 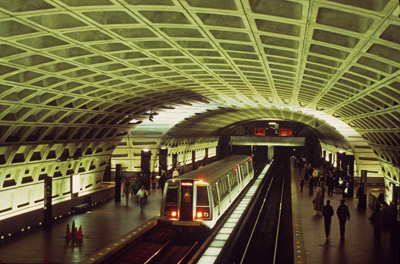 Whether you own a car, use a car sharing service, or don't drive at all, mass transit is a great way to get around while staying green. If two people car pooling removes one car from the road, the benefits are even greater when 30 people ride a bus and eliminate all their cars from the streets. The benefits really add up when you think of the hundreds of people on one train. Not only does mass transit ease congestion, it reduces pollution. It also encourages green development by promoting greater population density around subway stations and major bus lines.

There's also an economic benefit to the riders. Take a typical commuter in the Washington D.C. area. Commuting from suburb to suburb, he or she spends roughly $35 a week on gas, plus an additional $12.50 a week on tolls (not to mention wear and tear on the car). That works out to about $9.50 a day in commuting costs. The local Metro Bus costs only $1 a ride, which means he or she would save $5.50 a day, or $27.50 a week. Plus, the metro bus can use HOV lanes, allowing a commuter to save traffic frustration and glide by, relaxing with a book. The benefits are even greater for workers who have to pay for parking. Look into mass transit options in your area to see how much you could save.

Want to save even more? Go green by going to work less. It's not laziness. Staying home can help the environment.

What's greener than people riding a bus? People riding a green bus! A number of mass transit systems are trying out alternative fuel buses, including hybrids, buses powered by natural gas, and buses powered by biodiesel. Having buses run on alternative fuels really increases the benefits of mass transit because not only does it reduce the number of cars using gas, it reduces the need for gas, period.