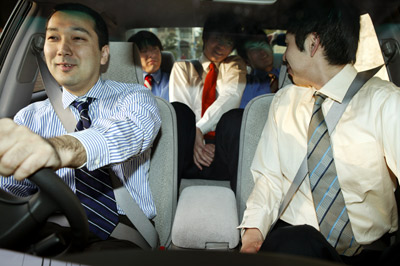 By car pooling, a group of Tokyo businessmen get to save gas and enjoy each others' company.
Holos/Riser/Getty Images

If you really want to cut down on your fuel usage, car pooling is a great way to do it. When two (or more) people buddy up and ride together, the number of cars on the road drops and gas is saved. It's that simple.

A number of cities and towns have car pooling resources. Some heavily congested areas use High Occupancy Vehicle (HOV) lanes to encourage carpooling. HOV lanes are lanes set aside for cars that carry a certain number of people. Get in the lane with fewer people in your car, and you'll get a ticket. Since most people drive by themselves, HOV lanes have fewer cars and less traffic. Car poolers benefit by saving time, while the cities they're in benefit by having fewer cars on the road and less pollution.

Ride sharing is another car pooling resource many areas have. Ride sharing is a formal program that matches interested car poolers together. That can be a big help, since you may not live near anyone you work with. Ride sharing programs also sometimes provide central locations for picking up and dropping off car poolers, so time isn't spent driving to all the participants' houses. Some programs also provide help if car pooling plans fall through. For example, if the person you rode into work with gets sick and leaves early (or if you get sick and have to leave early), a ride sharing program will make sure you get home.

Car pooling isn't just a good way to drive green and break up a lonely commute; it's a good way to save a lot of money. By alternating driving days with another driver, you'll cut your gas costs by half. And by not driving your car as much, you'll save on routine maintenance. Driving only half as much will also slow the rate you put miles on your car, helping its resale value.

Want to spend even less time on the road and less money on owning a car? Keep reading to learn about the benefits of car sharing.