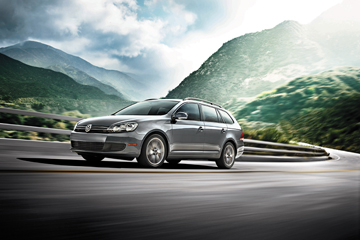 You can opt for a clean-diesel engine in the Volkswagen Jetta SportWagen. But do your diesel-powered savings plans actually add up?
(Courtesy of Volkswagen of America. Inc.)

Nothing makes you feel more broke than a trip to the gas station. You have to stand there watching the numbers flick by, going up and up and up. You start daydreaming of those clean diesel cars, the ones that get around 40 miles per gallon (17 kilometers per liter). Sure, they cost a little more, but in your daydream, you'd make up the difference with the savings on fuel. Good idea, right? Well let's find out if your daydreams have any truth in them.

As an example, let's have a look at the 2014 VW Jetta SportWagen since it comes in both gasoline and clean diesel versions that are nearly identical -- except for the engine, of course. The basic gas model sells for $20,795, and the diesel is listed at $26,250, a difference of $5,455. But can going a little farther on a tank of gas really make up more than five-thousand bucks? According to EPA estimates, the gas model gets 26 miles per gallon (11.1 kilometers per liter) combined city and highway and at 2013 gas prices, you'd pay around $2,100 a year for fuel. The diesel gets 34 miles per gallon (14.5 kilometers per liter) combined, but you have to remember that diesel fuel is a bit more expensive, too. In the end, the EPA estimates you'll pay about $1,750 per year in fuel. That's $350 less. High five!

But hold that high five for just another minute, kids. With $350 in fuel savings per year, it would take 15.6 years to make up that $5,455 difference.

Now let's say that you're already driving an SUV with rotten mileage. Maybe it's something like a 2014 Chevy Suburban with four-wheel drive. That monster gets 17 miles per gallon (7.2 kilometers per liter) combined, and the EPA estimates tell us that you're likely spending about $3,200 a year on fuel. Yikes. Switching to a gas-powered Jetta SportWagen will certainly help, but if you opt for the diesel-powered SportWagen, you'll save $1,450 a year. Now we're talking!

People always want to know if these new fuel technologies "pencil out." They want to see the math and really know if it's worth paying extra up front to keep on saving for the next 10 years (or however long they intend to keep their car). The answer I've found just about every time is that if you're in it for sheer dollars, it doesn't pencil out. Not for hybrids, not for diesels and not for E85 or whatever else you're into. You have to have another reason to want these cars. These alternative fuels use less oil than gasoline cars across the board, so if reduced drilling or foreign oil dependence is important to you, then put your money where your mouth is, bucko. They also run cleaner -- even clean diesels emit less CO2 than gasoline cars. Welcome to the 21st century! So if greenhouse effects are your bugbear, then you'll have to pay to produce less of them while you drive to work. Just don't expect to finance your solar panel project with the fuel savings.

What are the best sources for unbiased fuel economy data?
How Hydrogen Cars Work
Grassoline: Can we fuel cars with grass?