by Matt Cunningham
Prev NEXT
6 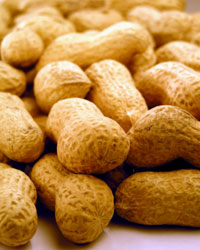 Because of the high demand for peanuts as a food source, they're too valuable to use as a widespread biofuel.
Hemera/Thinkstock

Ah, the ever-versatile peanut. Though considered a legume rather than an actual nut, the peanut is arguably one of the most popular foods of its type in the Western diet. Between a sea of mixed nuts, peanut-y candy and the peanut butter sandwiches that fill millions of lunch boxes each school day, we are deeply attached to the lowly peanut.

The peanut has a number of uses beyond food, many of which were promoted by renowned African-American botanist Dr. George Washington Carver. His archives include lists of more than 300 uses for peanuts, ranging from dye and plastics to the oil that can potentially be used as a biofuel [source: Fishbein].

But peanuts are victims of their own popularity when it comes to biofuel. Because peanut oil can be used for a number of food, medicinal and industrial purposes, it's simply too valuable to convert into biofuel cheaply. In a case of simple economics, demand keeps the price too high to make peanut oil a practical, edible biofuel for now.