by Matt Cunningham
Prev NEXT
10 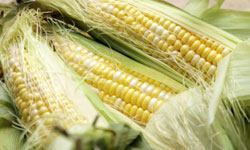 While corn has become a very popular biofuel, it's not without its drawbacks.
iStockphoto/Thinkstock

Along with being a staple in the Western diet, corn has turned out to be a very popular biofuel. Thanks to ready availability and its high content of ethanol-producing sugars, this biofuel is familiar to many drivers -- it's often the source of the ethanol in E85 gasoline blends.

Ethanol producers turn corn from food to fuel using a system that first breaks the corn down into its basic components: lignin, a substance that forms and strengthens the plant's cell walls, and cellulose, which contains the plant's sugars. The producers ferment the cellulose to produce ethanol, essentially a high-test version of the types of alcohol produced from corn mash [source: Shakashiri]. The refined fuel ethanol is often blended into gasoline as a smog-reducing agent, but it can be used by itself as a fuel.

In the United States, corn-based ethanol is truly a domestic alternative to some of the nation's foreign fossil fuel use. But it's not without drawbacks. Research suggests that the energy that goes into producing corn ethanol -- from the gas in the tractor on the farm to the fertilizer used to keep the corn healthy -- burns more fossil fuel than the ethanol replaces [source: Pimentel]. Adding to this negative-sum equation, the irrigation demands to grow corn in drier locations have the potential to pinch water supplies, especially as farmers turn to ethanol production as a source of income [source: McKenna].

And then there's the economic factor. Between food production, animal feed and its other industrial uses, corn is in high demand. Adding ethanol producers to compete for the world's corn supplies means that prices for the crop -- and its subsequent products -- can spike with increased ethanol demand. Combine the factors and, though it's a useful biofuel, corn isn't likely to be the sole biofuel that tempers the world's dependence on fossil fuels.