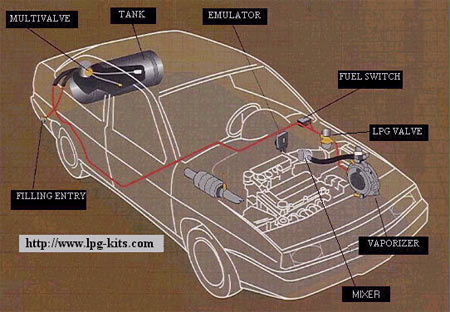 The process of converting a car to run on propane is fairly demanding and requires a good knowledge of automotive systems in general to accomplish.* Several companies offer kits that include all the needed parts to perform the conversion. Those without the necessary know-how should try to find a local mechanic with experience in LP-gas conversions to get the job done. Although propane is very safe as an automotive fuel, if the system is not installed correctly, there can be safety problems.

The first step is choosing a tank. Most conversions are dual-fuel conversions, meaning you won't be replacing your old fuel system, you'll simply be adding a second. As a result, the propane tank will take up some of the storage space in your car, usually in the trunk.

Tanks come in "torpedo" or "donut" form. Torpedo tanks generally have more capacity, but will take up more space in your car. Donut tanks are designed to fit in the spare tire well of your car. They are smaller tanks, and you'll have to sacrifice your spare tire. In larger vehicles, you could mount multiple tanks for increased capacity.

Once the tank is bolted in, a fill point must be drilled into the car's body, usually near the gasoline fill point or at the back of the trunk. The ideal location is one that requires minimal piping to connect to the tank. The fuel lines themselves are copper tubes, which offer a certain amount of flexibility when the lines are routed. The tank must be connected to the fill point, and lines also have to run along the underside of the car up to the engine.

A solenoid valve (LPG valve in the above diagram) must be installed on the fuel line in between the tank and the engine. This valve cuts the flow of LP gas when the car is running on gasoline and when the engine is shut off. It also has a filter built in that removes any dirt that may be in the fuel.

The next major component is called a regulator, also referred to as a vaporizer. This device performs one of the functions that a carburetor handles in a gasoline engine -- it uses heat from the car's cooling fluids to vaporize the propane into gas form. Another safety check occurs at the regulator, as well. It includes an electronic circuit that cuts the flow of gas if the engine stops or stalls. The regulator is usually smaller than a regular carburetor, so finding space for it in the engine compartment shouldn't be a problem.

The other part of a carburetor's function is handled by a mixer mounted in the intake manifold. The mixer takes information from the car's sensors or ECU, and then it controls the amount of gas that flows into the cylinders.

The system must then be wired into the car's electrical system, allowing for a functioning fuel gauge, as well as proper automatic switching between propane and gasoline (along with a dashboard-mounted manual switch). There must be connections to the car's ECU so that the engine controller can adjust for different fuel settings.

Cars with an electronic injection system will probably need an electronic emulator. When the car is operating on LP gas, the fuel injectors will not be sending any information to the other sensors in the car -- this will light up the "check engine" light and give incorrect diagnostic readings. The emulator fakes the proper signals so the ECU can operate properly.

Conversion kits come with more detailed instructions, but this is a basic overview of what needs to happen in a dual-fuel conversion.

Next, we'll find out how safe LP gas is.

*Disclaimer: This should not be used as a guide for an actual LPG conversion. It is intended as an overview of the process and not a set of instructions. Unless you are very experienced in automotive fuel systems and electrical systems, you are strongly urged to have the conversion performed by a professional. All conversions should be tested and approved by a professional with experience testing LPG systems before they are used.