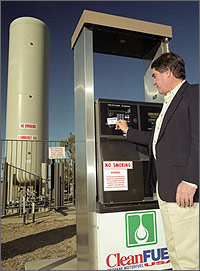 According to the World Liquefied Petroleum Gas Association (WLPGA), more than 9 million vehicles in 38 countries currently operate on LP gas. It's not a new idea: Propane-powered vehicles have been around for decades. The benefits include reduced emissions, quoted by WLPGA as "50% less carbon monoxide, 40% less hydrocarbons, 35% less nitrogen oxides (NOx) and 50% less ozone forming potential compared to gasoline" [ref]. With government incentives and tax breaks figured in, LP gas used in cars (known as autogas) can be much cheaper than gasoline. Even without the incentives, it is usually much cheaper. Autogas is a high-octane fuel, offering performance comparable to gasoline and diesel, and many owners claim that autogas runs more smoothly, resulting in less wear and tear on engine components.

The easiest way to start using propane for transportation is to buy a vehicle that was designed and built to use autogas. A wide range of manufacturers, including major American car companies like Ford, General Motors and Daimler-Chrysler, offer propane-powered options on some models. Typically, you won't find these cars on the showroom floor -- they have to be special ordered. In some cases, there is no production model powered by LP gas, but an LPG system can be factory installed as an option. Examples of cars that are offered as LP gas models include the Ford Crown Victoria, Dodge Ram, Ford F-150 truck, Chevrolet Cavalier and Toyota Camry.

Rarely (though more often in Europe), cars are built solely with an LP-gas fuel system. The engine is tuned and adjusted specifically to run at maximum efficiency on propane, which results in reduced engine wear and better mileage in the long run. However, many consumers are worried that a propane filling station could be hard to find. For that reason, most LP gas cars have dual fuel systems -- one for gasoline and one for propane. The systems are set to switch automatically between the two fuels as appropriate. This allows owners to use clean, cheap propane when it's available, but they still have the option of a quick fill-up at the local gas station if they need it.

How hard is it to find a propane filling station? Actually, it's not very difficult at all. Unlike some other alternative fuels (such as hydrogen), a large and stable infrastructure already exists for vehicles running on propane. You can use the Alternative Fuels Data Center to find the nearest LP-gas refueling stations. As an example, there are five LP-gas refueling points within 25 miles of the author's house in Buffalo, N.Y.

In the next section, we'll discuss the basics involved in converting a gasoline-powered car to run on autogas.