Browse the article What are the dangers of hydrogen-powered vehicles? 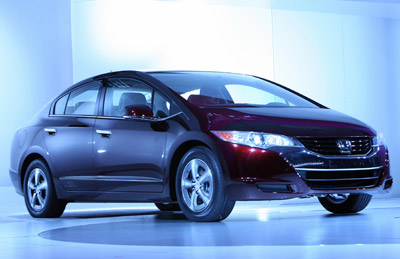 The 21st century will be a time of change, though this can probably be said of any century since the invention of the calendar. We can, however, make a pretty safe assumption about what one of those changes will be: The 21st century will see the end of the widespread use of fossil fuels.

Actually, this is an easy guess. Fossil fuels, such as coal and petroleum, are the remains of prehistoric organisms buried beneath the earth's surface millions of years ago -- and they're in limited supply. Eventually the reserves of these fuels will give out. When this happens -- and preferably long before this happens -- it's important that we find new ways to power our technology. In particular, vehicles that currently use internal combustion engines to burn gasoline or diesel fuel will need to run off new fuels that are less scarce and burn cleaner, reducing or even eliminating pollution.

One of the most promising new fuels is hydrogen, the first element in the periodic table. The term hydrogen economy was coined in 1970 by chemist John Bockris to refer to a future in which all vehicles would be fueled by hydrogen. There are a number of advantages to a hydrogen economy. For one, it wouldn't require burning increasingly scarce petroleum reserves to power our vehicles. A hydrogen internal combustion engine would be pollution-free and wouldn't create the carbon emissions associated with gasoline-powered internal combustion engines.

Aside from internal combustion-powered vehicles, hydrogen can also be used to power a vehicle through a device called a fuel cell. A fuel cell separates the single electron in a hydrogen atom from the single proton and uses the electrons to produce a stream of electricity. This electricity can then power the motor in an electric vehicle. Fuel cells don't use fossil fuels and they don't produce pollution, so they would seem to be an ideal successor to internal combustion engine as the energy source for the cars of the 21st century. At least one hydrogen fue­l cell car, the Honda FCX Clarity, is already available for lease in certain parts of California.

But are hydrogen fuel cell vehicles too good to be true? Let's look at some of the chemical dangers that might be associated with hydrogen energy. 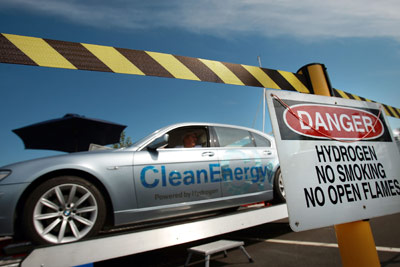 Hydrogen-powered cars are already on the road -- but are they dangerous?
Spencer Platt/Getty Images

Hydrogen is the most abundant element in the universe; however, here on the surface of the Earth, pure hydrogen gas is relatively rare. That's because hydrogen gas -- which is usually found in molecular form, with two hydrogen atoms bound together to form H2 -- is so light that, if not contained, it will rise rapidly to the top of the Earth's atmosphere and escape into space. Most hydrogen on the Earth's surface is bound together with other types of atoms as molecules that form various substances. For example, H2O, better known as water, and CH4, also known as methane, both contain hydrogen molecules. Before it can be used as a fuel, the hydrogen must first be extracted from these substances and then contained, usually in highly compressed liquid form.

Are there dangers associated with pure hydrogen? To put it simply, yes. When liquid hydrogen is stored in tanks, it's relatively safe, but if it escapes there are associated hazards.

Topping the list of concerns is hydrogen burns. In the presence of an oxidizer -- oxygen is a good one -- hydrogen can catch fire, sometimes explosively, and it burns more easily than gasoline does. According to the American National Standards Institute, hydrogen requires only one 10th as much energy to ignite as gasoline does. A spark of static electricity from a person's finger is enough to set it off. Ideally, no oxygen should be present in the liquid hydrogen tanks in a fuel cell vehicle, but trace amounts of air may contaminate the hydrogen supply. If the hydrogen should escape, it will immediately come into contact with the oxygen in air.

Another concern is that hydrogen flames are nearly invisible. When hydrogen catches fire, the flames are so dim and hard to see that they're both hard to avoid and hard to fight.

Next, there's the potential for hydrogen to asphyxiate people. Hydrogen isn't poisonous, but if you should breathe pure hydrogen you could die of asphyxiation simply because you'll be deprived of oxygen. Worse, you won't necessarily know that you're breathing hydrogen because it's invisible, odorless and flavorless -- much like oxygen.

The final concern that we want to mention here is that liquid hydrogen is cold. Because it's highly compressed, liquid hydrogen is extremely cold. If it should escape from its tank and come in contact with skin it can cause severe frostbite.

How seriously should you take these dangers? Could this list of dangers make hydrogen look more hazardous than it really is? That's possible, as you'll find out on the next page. 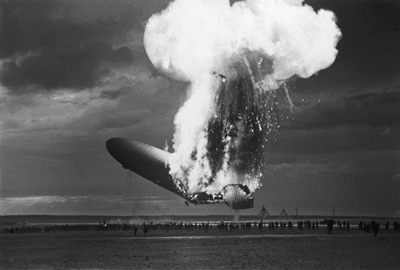 The German-designed and built passenger airship the Hindenburg (LZ-129) catches fire as it attempts to land in Lakehurst, N.J., May 6, 1937.
Arthur Cofod/Pictures Inc./Time Life Pictures/Getty Images

Now that you know about the dangers of hydrogen as a fuel source, should you be terrified by the prospect of having a tank full of it in your car? Not necessarily. Because hydrogen gas is so light, it disperses rapidly, mixing with the surrounding air and rapidly rising through it. Although pure hydrogen ignites quite easily, in reality, this diluted hydrogen mixture is no more likely to catch fire than gasoline is. And because it rises it isn't likely to remain near the ground, where it's most likely to harm people.

The most famous hydrogen fire in history was probably the explosion of the German airship Hindenburg in 1937. No one is exactly sure how the fire started -- there are a few theories -- but the Hindenburg contained a large quantity of hydrogen, which burst into flame along with the airship's skin. Of the 97 passengers and crewmembers on board the Hindenburg, 35 died. This harmed the reputation of hydrogen for many decades and most likely slowed its use as a fuel; however, there's no evidence that any of the victims were killed by the hydrogen fire itself. Most died when they panicked and jumped out of the airship. The rest were killed when the fire spread to the engines, as result of the airship's burning skin. The hydrogen, meanwhile, rose above the passengers and crewmembers, keeping the hydrogen fire above the mayhem happening below.

Because a hydrogen fire doesn't radiate as much heat as most fires do, it is less likely to cause secondary fires. This doesn't mean that the hydrogen fire wouldn't burn you if you touched it -- it's still plenty hot -- but it's less likely to spread. As for the hydrogen being odorless and undetectable, this can be offset to some extent by the addition of odorants to hydrogen fuel, giving the hydrogen an artificial yet detectable smell. As the hydrogen disperses the odorant won't necessarily travel with it, but you'll be able to determine that a hydrogen leak has occurred and take appropriate action.

As for the danger of asphyxiation -- this is really only a problem in an enclosed space, such as a garage. If a hydrogen leak occurs in the open, the rapid dispersal of hydrogen means that it's unlikely that there will be a large enough concentration of the gas to present a breathing hazard.

This doesn't mean that hydrogen shouldn't be treated with a healthy respect for its dangers, but in practice, these dangers are unlikely to be any greater than those of gasoline. In fact, with its rapid dispersal and tendency to rise, hydrogen could pose less of a threat than the fuels we use now.