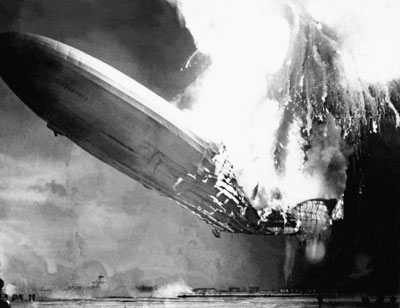 The Hindenburg explosion on May 6, 1937, at Lakehurst, New Jersey.
AFP/Getty Images

When the Hindenburg airship approached its dock in Lakehurst, N.J., on May 6, 1937, the blimp that held the passenger decks aloft was filled with hydrogen. This element, the simplest -- and most abundant -- in the universe, has one proton with a single electron revolving around it. Hydrogen also weighs the least of all the elements atomically. It can pack quite a punch, creating vast amounts of energy when oxygen and an ignition source are introduced. When the Hindenburg exploded, the world witnessed the power of hydrogen.

As the Hindenburg was docking that May evening, the blimp's outer skin was exposed to a static spark. In a matter of seconds, flames tore across the airship, reducing it to a ball of flames and twisted metal. Thirty-six people lost their lives in the disaster [source: National Archives]. And as fast as the Hindenburg burned, so, too, did the public's opinion of hydrogen. For many decades following the disaster, hydrogen was viewed with skepticism and even alarm. A "hydrogen fear factor" developed regarding the element [source: Edwards].

Today, as concerns grow about a possibly dwindling global supply of oil -- and increasing emissions of pollutants from that oil -- energy researchers are reconsidering hydrogen as a source of fuel. It certainly has a tremendous amount of promise: Hydrogen emits little or no greenhouse gases (GHGs). Its major byproducts are water vapor and heat. Hydrogen has the highest energy output by weight of any fuel [source: CECA]. And it's plentiful; hydrogen can be produced by a number of sources, from natural gas to water itself.

But the question still remains: Is hydrogen fuel a safe source of energy for our cars? How can hydrogen even be used as fuel? There's a quick primer on the next page. 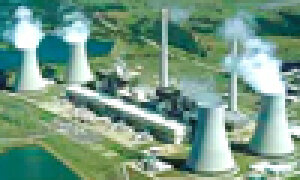