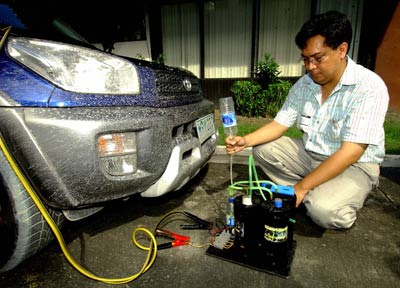 A Filipino inventor, Glen Castillio, collects hydrogen from his portable hydrogen reactor which is connected to a 12-volt battery in the car. His reactor separates enough hydrogen from water to run an automobile engine.
JAY DIRECTO/AFP/Getty Images

In most aftermarket hydrogen-on-demand systems, the HHO gas is created by running an electrical charge through water and another chemical -- the type of chemical varies, depending on the system. The electrical charge is generated by the vehicle's battery. The process creates HHO gas, which is then fed into the engine through the intake manifold where it mixes with the gasoline and is burned in the combustion chamber. Supposedly, adding the HHO gas to the gasoline allows it to burn at a lower temperature, increasing efficiency and decreasing harmful emissions.

Most companies and inventors who make these aftermarket parts describe them as a way to power your car with water. In truth, it's not water that's powering the car -- it's the chemical the water is reacting with -- along with the gasoline or diesel fuel that you normally put into the fuel tank. In fact, powering a car with water would be nearly impossible. Chemical reactions release energy by altering chemical bonds. The chemical bond of water is so stable that to alter it requires more energy than is gained in the chemical reaction. So while these aftermarket systems may increase a gasoline engine's efficiency, the energy required to create the HHO gas is substantial enough to negate the benefits.

But these aftermarket systems aren't the only way to introduce hydrogen into a vehicle's power plant. Read the next page to find out how automakers are making good use of hydrogen.