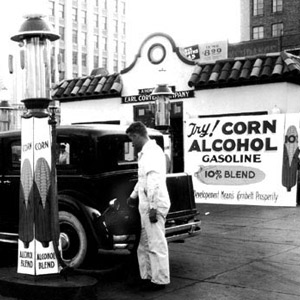 Ethanol fuel isn't a modern invention; some folks have been fueling with corn for decades.
DOE/JGI

In its current status as a low-percentage fuel additive, the benefits of ethanol are obvious. Since ethanol contains a lot of oxygen in its chemical structure, it burns pretty cleanly. Added in small amounts (typically one part ethanol, nine parts gasoline) to the gasoline that fuels our cars, it reduces greenhouse emissions like carbon monoxide and nitrogen oxides. Argonne National Laboratory reports an approximate 10-ton (9.07-metric ton) decrease in greenhouse-gas emissions resulting from the use of ethanol fuel in 2007 alone [source: Biofuels Digest]. A 2006 study in Wisconsin showed 16 percent fewer high-ozone days since the 1994 introduction of 10-90 fuel [source: Ethanol].

The addition of ethanol to the fuel mix also reduces the amount of gasoline we consume when we drive, and any car can run on this 10-90 ethanol mix (called E10). The 85-15 ethanol mix (called E85) that only fuels special flexible fuel vehicles (FFVs) burns even more cleanly, further reducing the release of harmful gases into the atmosphere that can cause air and water pollution, global warming and smog. But only a relative handful of vehicles can run on this mix -- one in 40 cars as of 2006 [source: Joyce]. It's not commonly stocked in gas stations.

The problem with using ethanol as fuel in a large-scale way comes down to two primary, related issues:

While most experts agree on these two points, they tend to differ in terms of degree.

According to Cornell University professor of agriculture David Pimentel, producing ethanol actually creates a net energy loss. According to his calculations, producing corn and processing it into 1 gallon (3.7 liters) of ethanol requires 131,000 BTUs of energy; but 1 gallon of ethanol contains only 77,000 BTUs [source: Health and Energy]. And since farmers are using fossil-fuel-powered equipment to plant, maintain and harvest the corn and are using fossil-fuel-powered machinery to process that corn into ethanol and then, in almost all cases, to ship the product to collection points via fuel-powered transport, the ethanol industry is actually burning large amounts of gasoline to produce this alternative fuel. That ethanol could end up containing less energy than the gasoline consumed to produce it.

The transport aspect of the process could change soon, though, with the opening of the very first U.S. ethanol pipeline in December 2008. It carries ethanol 85 miles (136 kilometers) through Florida from Tampa to Orlando. Piping ethanol has always been a problem because the fuel picks up impurities on the way from point A to point B. These impurities are unacceptable in ethanol and can damage traditional gas pipeline material. But the Texas company that developed the pipeline appears to have overcome the challenges [source: Galbraith].

Of course that's just one pipeline. Even so, not all scientists agree with Pimentel's dire analysis regarding energy efficiency. ­The U.S. National Renewable Energy Lab finds that it requires 1 BTU of fossil fuel to get 1.3 BTUs of ethanol to market [source: NREL]. That would mean a 30 percent net gain in energy, not a net loss.

Energy efficiency aside, those in Pimentel's camp actually don't see corn as a truly renewable energy source. Pimentel estimates that powering a car for a single year using ethanol would require 11 acres (44,515 square meters) of corn, space that can be used to feed at least seven people [source: Health and Energy]. Since corn fields in the United States take a while to replenish themselves, due to both soil erosion and irrigation issues, those acres would ultimately be out of commission for an extended period of time, meaning no corn for ethanol and no usable land for other food crops. To sustain an ethanol-based fuel industry, more and more farm land would have to be set aside for corn alone. The ultimate result could be a shortage of domestically grown food and higher prices at the supermarket for all sorts of produce.

For more information on ethanol and other renewable-energy options, look over the links below.