How the Hydrogen Economy Works 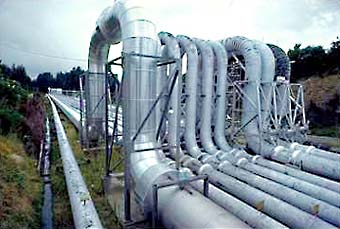 It seems like every day there is a new announcement in the news about automobiles powered by fuel cells. The promises are tantalizing, since fuel cells have the potential to very quickly double the efficiency of cars while significantly reducing air pollution.

At the same time, there have been news stories for decades about the problems associated with petroleum. Everything from oil spills to ozone alerts to gl­obal warming gets blamed on our dependence on fossil fuels.

These two forces are leading the world toward what is broadly known as the hydrogen economy. If the predictions are true, over the next several decades we will all begin to see an amazing shift away from the fossil fuel economy we have today toward a much cleaner hydrogen future.

Can society actually make this shift, or will the technological, economic and political barriers keep us bound to petroleum and other fossil fuels for the next century an­d beyond? In this article, you will learn about the benefits of a hydrogen economy, along with its potential problems. We will also examine some of the technology that would make the transition possible.

Problems with the fossil fuel economy

Currently, the United States and most of the world is locked into what could be called the fossil fuel economy. Our automobiles, trains and planes are fueled almost exclusively by petroleum products like gasoline and diesel. A huge percentage of our power plants use oil, natural gas and coal for their fuel.

While fossil fuels have played an important role in getting society to the point it is at today, there are four big problems that fossil fuels create:

Air pollution - When cars burn gasoline, they would ideally burn it perfectly and create nothing but carbon dioxide and water in their exhaust. Unfortunately, the internal combustion engine is not perfect. In the process of burning the gasoline, it also produces:

Catalytic converters eliminate much of this pollution, but they aren't perfect. Air pollution from cars and power plants is a real problem in big cities.

It is bad enough now that, in the summer, many cities have dangerous levels of ozone in the air.

Environmental pollution - The process of transporting and storing oil has a big impact on the environment whenever something goes wrong.

An oil spill, pipeline explosion or well fire can create a huge mess. The Exxon Valdez spill is the best known example of the problem, but minor spills happen constantly.

Global warming - When you burn a gallon of gas in your car, you emit about 5 pounds (2.3 kg) of carbon into the atmosphere. If it were solid carbon, it would be extremely noticeable -- it would be like throwing a 5-pound bag of sugar out the window of your car for every gallon of gas burned. But because the 5 pounds of carbon comes out as an invisible gas, carbon dioxide, most of us are oblivious to it. The carbon dioxide coming out of every car's tailpipe is a greenhouse gas that is slowly raising the temperature of the planet. The ultimate effects are unknown, but it is a strong possibility that, eventually, there will be dramatic climate changes that affect everyone on the planet. For example, if the ice caps melt, sea level will rise significantly, flooding and destroying all coastal cities in existence today. That's a big side effect.

Dependence - The United States, and most other countries, cannot produce enough oil to meet demand, so they import it from oil-rich countries. That creates an economic dependence. When Middle East oil producers decide to raise the price of oil, the rest of the world has little choice but to pay the higher price.

Advantages of the hydrogen economy

The big question with the hydrogen economy is, "Where does the hydrogen come from?" After that comes the question of transporting, distributing and storing hydrogen. Hydrogen tends to be bulky and tricky in its natural gaseous form.

Once both of these questions are answered in an economical way, the hydrogen economy will be in place.

We'll look at each of these questions separately in the following sections.

Where does the hydrogen come from?

­One of the more interesting problems with the hydrogen economy is the hydrogen itself. Where will it come from? With the fossil fuel economy, you simply pump the fossil fuel out of the ground (see How Oil Drilling Works) and refine it (see ­How Oil Refining Works). Then you burn it as an energy source.

In the hydrogen economy, there is no storehouse to tap into. We have to actually create the e­nergy in real-time.

There are two possible sources for the hydrogen:

­The second option is, of course, slightly perverse. You are using fossil fuel as the source of hydrogen for the hydrogen economy. This approach reduces air pollution, but it doesn't solve either the greenhouse gas problem (because there is still carbon going into the atmosphere) or the dependence problem (you still need oil). However, it may be a good temporary step to take during the transition to the hydrogen economy. When you hear about "fuel-cell-powered vehicles" being developed by the car companies right now, almost all of them plan to get the hydrogen for the fuel cells from gasoline using a reformer. The reason is because gasoline is an easily available source of hydrogen. Until there are "hydrogen stations" on every corner like we have gas stations now, this is the easiest way to obtain hydrogen to power a vehicle's fuel cell.

Where will the electricity for the electrolysis of water come from? Right now, about 68 percent (reference) of the electricity produced in the United States comes from coal or natural gas. All of that generating capacity will have to be replaced by renewable sources in the hydrogen economy. In addition, all of the fossil fuel energy now used for transportation (in cars, trucks, trains, boats, planes) will have to convert to hydrogen, and that hydrogen will be created with electricity, as well. In other words, the electrical generating capacity in the country will have to double in order to take on the demands of transportation, and then it will all have to convert from fossil fuels to renewable sources. At that point, and only at that point, will the flow of carbon into the atmosphere stop.

Right now there are several different ways to create electricity that do not use fossil fuels:

In the future, barring some technological breakthrough, it seems likely that one of two things will happen to create the hydrogen economy: Either nuclear-power or solar-power generating capacity will increase dramatically. Remember that, in a pure hydrogen economy, the electrical generating capacity will have to approximately double because all of the energy for transportation that currently comes from oil will have to be replaced with electrically generated hydrogen. So the number of power plants will double, and all of the fossil fuel plants will be replaced.

The electrical-generation problem is probably the biggest barrier to the hydrogen economy. Once the technology is refined and becomes inexpensive, fuel-cell vehicles powered by hydrogen could replace gasoline internal combustion engines over the course of a decade or two. But changing the power plants over to nuclear and solar may not be so easy. Nuclear power has political and environmental problems, and solar power currently has cost and location problems.

How do you store and transport the hydrogen?

­At this moment, the problem with putting pure-hydrogen vehicles on the road is the storage/transportation problem. Hydrogen is a bulky gas, and it is not nearly as easy to work with as gasoline. Compressing the gas requires energ­y, and compressed hydrogen contains far less energy than the same volume of gasoline. However, solutions to the hydrogen storage problem are surfacing.

For example, hydrogen can be stored in a solid form in a chemical called sodium borohydride, and this technology has appeared in the news recently because Chrysler is testing it. This chemical is created from borax (a common ingredient in some detergents). As sodium borohydride releases its hydrogen, it turns back into borax so it can be recycled.

Once the storage problem is solved and standardized, then a network of hydrogen stations and the transportation infrastructure will have to develop around it. The main barrier to this might be the technological sorting-out process. Stations will not develop quickly until there is a storage technology that clearly dominates the marketplace. For instance, if all hydrogen-powered cars from all manufacturers used sodium borohydride, then a station network could develop quickly; that sort of standardization is unlikely to happen rapidly, if history is any guide.

There might also be a technological breakthrough that could rapidly change the playing field. For example, if someone could develop an inexpensive rechargeable battery with high capacity and a quick recharge time, electric cars would not need fuel cells and there would be no need for hydrogen on the road. Cars would recharge using electricity directly.

Prospects for the future

­ You will hear more and more about the hydrogen economy in the news in the co­ming months, because the drumbeat is growing louder. The environmental problems of the fossil fuel economy are combining with breakthroughs in fuel-cell technology, and the pairing will allow us to take the first steps.

The most obvious step we will see is the marketing of fuel-cell-powered vehicles. Although they will be powered initially by gasoline and reformers, fuel cells embody two major improvements over the internal combustion engine:

Gasoline-powered fuel-cell vehicles are an excellent transitional step because of those advantages.

Moving to a pure hydrogen economy will be harder. The power-generating plants will have to switch over to renewable sources of energy, and the marketplace will have to agree on ways to store and transport hydrogen. These hurdles will likely cause the transition to the hydrogen economy to be a rather long process.