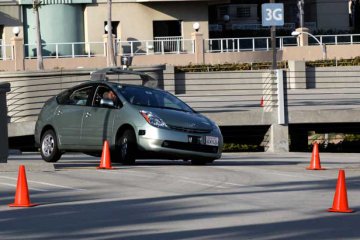 Have you ever seen a driverless car? Check out these car safety pictures to learn more.
jurvetson/Creative Commons

In true Google fashion, the company is already working on a solution: driverless cars. The idea might sound farfetched, but today’s artificial-intelligence software coupled with high-tech sensors and cameras create a more efficient car that requires you to do none of the work.

Google certainly isn’t the only one working on these autonomous vehicles. Car manufacturers, such as General Motors, have eyed this sphere for at least a couple years — but we’re still close to a decade away from seeing these cars on the lots of dealerships. Still the biggest challenges the industry has seen are legal: government regulation, liability laws and privacy control.

Until recently, the concept car was illegal in all 50 states. In June, Nevada passed a bill authorizing the Department of Transportation to develop regulations for driverless cars, opening the doors for this technology to one day go mainstream.

Developing rules helps navigate uncharted situations like the following. If a driverless car gets into an accident, who’s at fault: the software or the “driver”? (The answer: We’re still figuring it out.)

“The technology is ahead of the law in many areas,” Bernard Lu, senior staff counsel for the California Department of Motor Vehicles, told the New York Times. “If you look at the vehicle code, there are dozens of laws pertaining to the driver of a vehicle, and they all presume to have a human being operating the vehicle.”

The technology behind it

Red tape aside, autonomous cars take human error out of driving, creating a safer and more efficient mode of transportation. While giving a TED talk in March, Sebastian Thrun, a Stanford professor who helped build Google’s car, imagines a world where driverless cars saturate the roads. Highway capacities could double or even triple. Traffic jams would be eliminated. And car accidents, the No. 1 killer for young people, would be a thing of the past.

How does this happen? First, robots react faster than humans and can see 360 degrees. They also don’t get sleepy, drunk or distracted by text messages, Google engineers say. But in addition, these autos use a variety of sensors to tell when an object is near the vehicle, whether it’s moving, and, if so, how fast, and the driverless cars adjust accordingly. If car A, a driverless vehicle, travels at 60 miles an hour on the highway and eventually ends up behind car B, traveling 55 miles an hour, adaptive cruise control automatically decreases car A’s speed and keeps a safe distance from car B.

But sometimes accidents are unavoidable. Pre-safe systems, increasingly common in luxury cars, anticipate crashes by priming brakes and reducing engine power, for instance. If its pre-emptive efforts still indicate the car will crash, it prepares the airbags for deployment and tightens all the safety belts — it does all that in less time than for a human to slam on the brakes. (Funny enough, a Google driverless car got into its first crash in Mountain View in August, but turns out it was driven manually by a human. Oh, humans.)

These smart cars are capable of keeping a closer distance from other cars while also driving more safely, decongesting roads and reducing commute times. An average of 52 minutes is spent in traffic per day, “wasting your time on your daily commute,” Thrun said in his TED talk. “You could regain this time. This is 4 billion hours wasted in this country alone, and it’s 2.4 billion gallons of gasoline wasted.”

As experienced drivers know, not all roads are created equal. Google’s driverless car has traversed 140,000 miles in city, highway and mountain roads around the world, performing fine day and night and when faced with traffic lights, stop signs and toll booths. The cars have such a level of precision you’ll never have to worry about parking either, no matter how tight the spot is. (Skip to the 2:30 point of Thrum’s talk, video above, to see some of the cars’ stunts.)

“I think there’s a vision here, a new technology,” Thrun said, closing his speech. “I’m really looking forward to a time when generations after us look back at us and think how ridiculous it was humans were driving cars.”