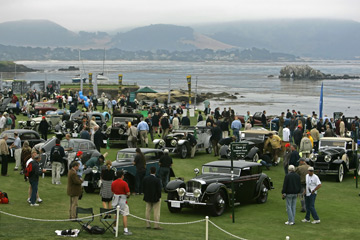 Car shows are a huge part of automotive culture, and from small towns to big cities you can usually find any number of different types of car shows. However, you probably won't find many car shows exactly like the Concours d'Elegance. At these shows you can't just show up and sign your name on the list of contestants; instead, owners and their cars are personally invited to attend. If it helps, you can think of it like the filet mignon of car shows.

The Concours d'Elegance is French for "the competition of elegance" [source: Webster]. The cars on display at these shows are not only fully restored to mint condition, but many times they surpass the condition of models that originally rolled off the assembly lines. Points are given and taken away based on a car's condition and even the smallest of imperfections, either inside or out, can cost a contestant fractions of a point [source: Martin].

The shows can last anywhere from a few days to an entire week and are often filled with other related events and activities including automotive expert discussion panels, the screening of automotive documentaries, live auto auctions and even automotive fine art galleries among others. Although the shows are open to public spectators, contestants are frequently celebrities and wealthy individuals who compete in concours events for automotive bragging rights [source: Martin]. As one example, enthusiasts like Jay Leno are a staple at some of the shows.

Many places around the world, including Paris and Mumbai have their own concours events, but some of the most famous shows are held in the United States at Pebble Beach, in California, Meadow Brook Hall, in Michigan, and on Amelia Island in Florida.

Up next, let's find out more about these show locations and what types of cars are eligible to compete.

Each location that hosts a concours event decides their own criteria when it comes to which cars to allow, how many can compete and what classes the cars will compete in. In addition, each concours may have a separate tribute or emphasis for that year's competition. For example, the 2009 Pebble Beach concours featured Bugatti and Bentley as the chosen featured marques and emphasized a celebration of Audi, Morgan, Packard, Ferrari and even Zagato style. Of course, competition isn't limited to those select few marques -- other cars were able to compete, too.

As you already know, contestants and their cars can only enter a concours event if they are invited to do so, but they can submit forms requesting that they be invited in upcoming years. Potential contestants can be invited only after they've submitted several detailed photos of their cars, and in some cases, any interesting story about the car's history. One of the main differences of a Concours d'Elegance show compared to other car shows is that once a car has been in the competition, it cannot return again to compete for up to 10 years [source: Pebble Beach Concours d'Elegance]. The only variation to this Pebble Beach concours rule is if the car has recently changed ownership or if it was newly restored beyond the level it was when it initially competed.

Each Concours d'Elegance features a wide range of cars, and the Pebble Beach, Meadow Brook and Amelia Island shows each have anywhere from 150 to 250 cars competing for the top honor. Every car accepted into the show fits into a specific category, or marque, for competition. Some of the categories may include post-war, pre-war, antique and vintage, horseless carriages, convertibles, Duesenberg, Porsche, Bentley and so on. There are also classes for open cars (cars without any windows), closed cars (cars with windows) and convertibles (which usually do have windows).

Although there can be lots of classes in a Concours d'Elegance show, each group is judged based on the same strict standards to determine a winner. Go on to the next page to learn how each car is judged.

Throughout a concours event you can expect to see several other activities happening that you simply won't see at most automotive shows, some of these may include:

Each concours has their own varying list of special events, but they revolve around the finer aspects of life with an emphasis on socializing.

Judging at a Concours d'Elegance 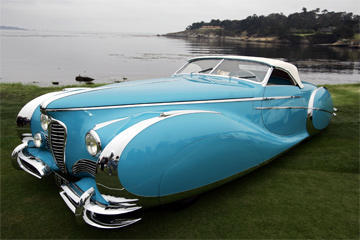 A 1949 Delahaye 175 S is shown on display at the Pebble Beach Concours d'Elegance in Pebble Beach, Calif.
AP Photo/Eric Risberg

The Pebble Beach concours Web site says that, "automobiles are judged for their historical accuracy, their technical merit and their style" [source: Pebble Beach Concours d'Elegance]. There are two types of judges at each event. The first is the class judge. Each car starts out by being judged in their respective group by a class judge. The class judge is a recognized expert in the category and they are assigned to judge each car based on the originality and authenticity of the vehicle. These two traits are very important because a Concours d'Elegance focuses much of its attention on preserving automotive history. Each car must be correctly restored without blemishes, dents or marks on any part of the vehicle. Each vehicle is striving for a perfect score of 100, and whichever vehicle comes closest to that score in their class is awarded the First in Class honor.

Once a car wins the First in Class award, it's able to move on to the top round with the rest of the First in Class winners to compete for the Best of Show award. The Best of Show is awarded by a second round of judges called honorary judges. Honorary judges take a more subjective approach to judging each car and focus their attention on the design, style and elegance of a particular vehicle. As each automobile drives along the First in Class ramp to receive its award, the honorary judges observe each vehicle. The cars are reviewed once again in the winners circle and each honorary judge independently marks a ballot to indicate which car they believe should win the top honor. Once all the judges have voted, the best of show honor goes to the vehicle receiving the most votes.

But aside from the First in Class and Best in Show awards, there are several other Concours d'Elegance honors that contestants may be eligible to receive. 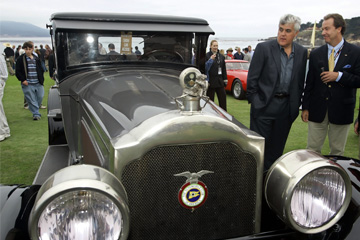 Some cars on display at the Concours d'Elegance shows aren't eligible to compete for First in Class or Best of Show honors. For those cars that don't win or can't compete, there are also other awards such as the Most Elegant Award and multiple trophies given away in the Special Award classes. Each concours event has its own selection of Special Awards to be given out, and these trophies are typically sponsored by automobile companies and other participating organizations.

For automobile enthusiasts who want to vote for their favorite car but don't have the expertise necessary to become a concours judge, MSN Autos hosts an online voting system where votes can be cast for the People's Choice Award [source: Pebble Beach Concours d'Elegance]. The Pebble Beach show also gives out an award to honor the racecar driver and restorer Phil Hill and another one, the Road & Track Trophy, to the car the editors of the magazine would most like to drive.

The contestants who participate in a Concours d'Elegance do so for bragging rights and so that their cars can earn some recognition among other automobile enthusiasts and restorers. Spectators and participants alike attend the shows to immerse themselves in the automobile culture that surrounds these prestigious events. And since attendance proceeds from the events are usually donated to local and national charities, it seems that everyone is a winner at a Concours d'Elegance.

For more information about Concours d'Elegance events and other related topics, follow the links on the next page.