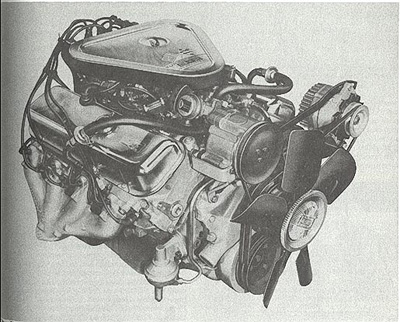 For the 1970 model year, Chevrolet announced a 454-cid expansion of the Mark IV, available for Monte Carlo, Chevelle, the big Chevrolet, and Corvette. At the same time, two 400-cid engines appeared on the specs charts, but they were totally different. One was actually a slightly larger 402 derivative of the big-block 396. The other that was a small-block unit based on the thick-web 350 that was a direct descendant of the fabled 327.

Chevy engineers had to bend some of their rules to get as much as 400 cubes from the small-block with its 4.40-inch bore spacing and short deck height. That configuration imposed a definite limit on how far stroke could be stretched without pulling the pistons too far out of their holes. Boring out to 4.125 inches left less than a quarter-inch between the bores, and that had to be solid metal, with no water jacketing to separate the cylinders. The 350's 3.48-inch stroke was extended to 3.75 inches, which necessitated larger diameter (2.65 inches instead of 2.45) main bearings to assure adequate overlap between the mains and the crankpin journals. That, in turn, required a new, heftier, and heavier crankshaft. The longer stroke caused an increase in piston speed that aggravated the greater heat-sensitivity of the siamesed cylinders. As a result, the small-block Turbo-Fire 400 had no potential as a performance engine. It did have advantages for emissions control, however, because of its more favorable surface-to-volume ratio. The most Chevy ever got from it was a rated 265 bhp.

By contrast, the Turbo-Jet 400 belonged to the big-block Mark IV family. It had almost the same cylinder dimensions as the small-block unit (4.126 x 3.76 inches), but delivered a hefty 330 bhp on 10.25:1 compression for 1970. The 454 launched that same year was basically the Mark IV design, with stroke extended to a full 4.00 inches. It came in two forms: the 390-bhp LS-5, with hydraulic lifters, 10.25:1 compression, and a four-barrel Rochester carb; and the 460-bhp LS-7, with solid lifters, 11.25:1 compression, and four-barrel Holley, plus a special higher-left camshaft and transistorized ignition.

The big-blocks were the culmination of Chevrolet's performance engine development. But these potent powerplants wouldn't take kindly to the anti-smog devices needed to meet stiffening emission standards beginning in 1973. That year, America would get its first "fuel shock," which ultimately would sentence big-inch high-performance cars to oblivion. Up to that time, Tonawanda was turning out 300,000 Mark IV V-8s annually. By the end of the 1976 model year, the big-block engine family would be gone.