The Chevrolet Impala SS came back on 17-inch aluminum wheels in 1995.

The 1995 Chevrolet Impala SS, with the nameplate's mid-1994 debut sparking rave reviews from the automotive press, returned with only minor changes. Most noticeable was a wider palette of hues that expanded the original "any color so long as it's black" philosophy to include Dark Cherry and Green-Gray. 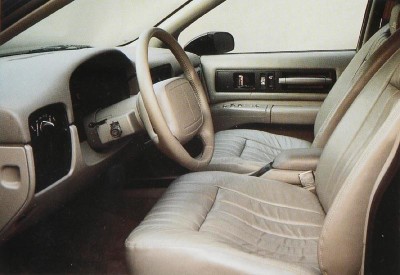 Gray was the only interior color offered on the 1995 Chevrolet Impala SS.

The only powertrain offered was again the 260-horsepower 5.7-liter LT1 V-8 mated to a four-speed automatic transmission. Since this same combination was optional on the Caprice, the Impala SS remained largely an appearance upgrade -- and even that was compromised somewhat this year, as the Caprice took on the Impala's "dog leg" rear roof pillar.

However, the Impala featured a more sophisticated suspension system that gave it amazing agility for a two-ton sedan. It also retained its unique monochromatic paint treatment, aero body aids, and those beautiful 17-inch aluminum wheels.