The 1994 Chevolet Impala SS was a variant of the Caprice.

The 1994 Chevrolet Impala SS was based on a 1992 show car and set enthusiast's hearts afire when it burst on the scene midway through the 1994 model year. Reviving a name from Chevy's performance roots, the Caprice-based Impala SS was little more than a styling exercise, but its success would spawn a series of similarly adorned concept cars from Chevy's rather bland stable of front-drive people-movers.

Coming just in time to give the Impala SS some bite to back up its bark was a heavily revised 5.7-liter V-8 carrying the honored LT1 label. Running on lower compression that allowed it to get by on regular gas, it produced 260 horsepower in this application, versus 275 in the Camaro Z28 and 300 in the Corvette -- both of which required premium. Nevertheless, it represented an 80-horsepower increase over the previous 5.7-liter V-8 offered in Chevy's full-size line.

Also new was a 4.3-liter V-8 producing 200 horsepower, which was the standard engine in Caprice sedans and wagons. While the Impala SS came standard with the 5.7-liter LT1, that engine was also optional on Caprices. Regardless of engine, the only transmission offered was a four-speed automatic. 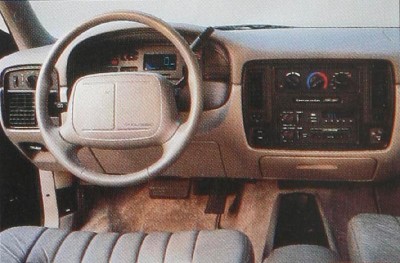 Unfortunately, the 1994 Chevrolet Impala SS offered no manual transmission, and to makes matters worse the gear shifter was on the steering column.

What made the Impala SS special were its monochromatic paint scheme, available in black only; unique "dogleg" C-pillar inserts; "retro" Impala insignias; rear spoiler; and especially its wide 17-inch five-spoke aluminum wheels. A lowered sports suspension with De Carbon gas-pressurized shocks gave it better road manners than any previous full-size Chevy could hope to attain, and the potent powertrain drove through a standard limited-slip differential backed by four-wheel disc brakes. Inside, bucket seats and black dashboard trim signaled its sporting intent, but enthusiasts bemoaned the column-mounted shifter and lack of a tachometer.

Other news regarding Chevy's full-size line for 1994 paled by comparison, but there were some significant changes. The addition of a passenger-side air bag prompted a redesigned dash with digital speedometer and analog auxiliary gauges housed in one rectangular pod, and radio/climate controls in another. Also, the standard air conditioning now used CFC-free refrigerant.