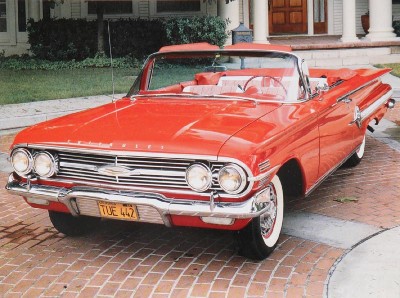 The 1960 Chevrolet Impala shifted direction a little, creating a more conservative look than was seen on the redesigned 1959 model.

Looking back from today's vantage point, the '59 Chevrolets don't look nearly as outrageous as they did at the time. In the eyes of today's collectors and enthusiasts, those scoffed-at tailfins are a major part of the car's appeal -- the bigger the better. Stylists and marketers back then, on the other hand, realized that the fin-and-chrome fashion had about run its course. They needed to shift direction a little, creating a more conservative face-lift.

Those sweeping horizontal fins didn't disappear, of course. Not yet. For 1960 they were simply toned down a bit, giving Chevrolets a more tasteful and temperate back end -- an angular, tapered shape that integrated neatly into the quarter panels. The effect was helped by installation of three modestly sized round taillights on each side of the top-of-the-line Impala.

Up front, those ferocious snorting-nostril air intakes above the headlights were deleted completely. By the standards of the Fifties, at least, the '60 redesign ranked as downright restrained, promoted for "Space -- Spirit -- Splendor."

Drivetrain choices diminished a bit, but no one could say they were deprived -- with seven V-8 engine ratings to choose from, in 283- or 348-cubic-inch size. Top choice was the 348-cubic-inch Super Turbo-Thrust Special, breathing through triple two-barrel carburetors and using 11.25:1 compression and dual exhausts to eke out 335 horsepower. More modest variants of the 348 yielded 250 to 320 horses. The carbureted Turbo-Fire 283-cubic-inch V-8 could have either 170 or 230 horsepower, but fuel injection no longer was an option under full-size Chevrolet hoods.