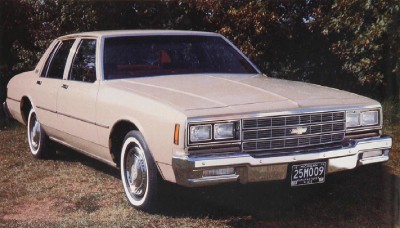 The 1981 Chevrolet Impala tweaked its transmission to improve mileage.

Changes for the 1981 Chevrolet Impala and Caprice Classic were almost dramatic compared to the subtle year-to-year changes normally seen on Chevrolet's full-size line. Visually, the cars changed little, but underneath were some commendable improvements.

GM's Computer Command Control (CCC) emission system improved driveability somewhat while lending a hand in meeting 1981's stricter emissions regulations, but bigger news came in the form of a new four-speed automatic transmission with long-legged 0.67:1 overdrive fourth gear. Combined with a lock-up torque converter, a Caprice or Impala with the 305-cubic-inch V-8 (the only engine available with the four-speed automatic) registered an impressive 26 EPA highway miles-per-gallon, a figure that could very nearly be duplicated in "real world" driving.

The handsome 1981 Chevrolet Impala stayed competitive even as a full-size.

For 1980, only station wagons could get an Oldsmobile 350-cubic-inch diesel V-8, but availability of that engine was expanded to include all Impala and Caprice models for 1981.