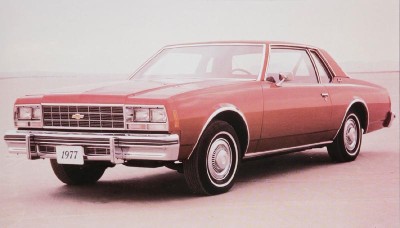 The 1977 Chevrolet Impala downsized the model but increased interior space.

The 1977 Chevrolet Impala and Caprice, like other GM models, got a dramatic downsizing for 1977 as part of a total B-body redesign. Shorter, taller, and narrower, billed as "The New Chevrolet," the new full-size cars promised to be "more appropriate for the times," more manageable, and occupying "a little less space in the world."

Of course, customers were assured that the reduced-size models actually offered more interior space, not less. In fact, head room and rear leg room were greater than in '76 models. So was trunk space, measuring 20.2 cubic feet in the sedan.

Chevrolet pulled out all the stops to launch its freshly shrunken line. Motor Trend honored the downsized Chevrolet, naming it Car of the Year. In this new, sleeker form, the biggest Chevrolets would continue -- with a minor facelift in 1980 -- all the way through the 1990 model year. Downsized full-size models would see massive service in police fleets through the late 1970s and '80s (and beyond), a tribute to the car's engineering excellence -- and the performance of the small-block V-8 in particular.

Six-cylinder engines were back as part of the efficiency focus. EPA mileage ratings reached 22-mpg highway and 17 city with six-cylinder power, and 20 highway/16 city with the new 305-cubic-inch V-8. The latter was the most popular, producing 145 horsepower with a two-barrel carburetor, though a 170-horsepower 350-cubic-inch V-8 was also available. In other news, a new Smart Switch operated the dimmer and turn signals. 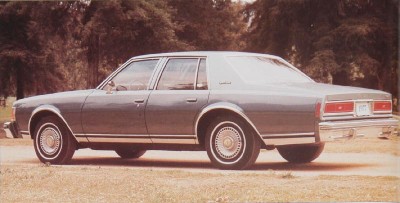 The 1977 Chevrolet Caprice Classic was smaller and more efficient than before.

Station wagons lost their Glide-Away tailgates, replaced by an ordinary Door-Gate that opened sideways or folded down. Wagon wheelbases shrunk from 125 to 116 inches, the same as coupes and sedans, and overall length trimmed down by more than a foot.

The Impala series consisted of a coupe, four-door sedan, and four-door station wagon (with two or three seats). At midyear, a lavishly trimmed Impala Landau Coupe joined the line. The completely different Caprice redefined the entire concept of the American-made full-size automobile, signaling "the shape of cars to come."