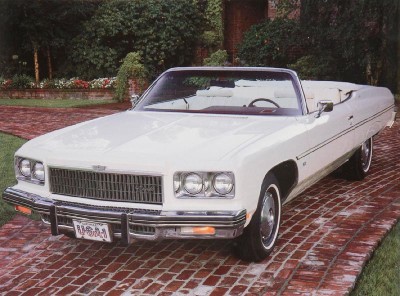 The 1975 Chevrolet Caprice Classic was the last full-size convertible for Chevy.

The 1975 Chevrolet Impala was sold on an advertising theme of "Chevrolet makes sense for America." And big cars like the Impala and Caprice -- despite their gas-hungry nature -- were heavily advertised.

This was the final year for the full-size Chevrolet convertible -- a Caprice, which listed for $5,113 but typically carried a lot of extra accessories. For the first time, convertibles could have a 50/50 reclining passenger seat and a sport cloth interior. Production of 8,349 full-size ragtops actually was higher than it had been since 1970, when 9,562 open Impalas went to dealerships. The age of the oversize, ostentatious American convertible was over.

Two coupes and two sedans, pillared and pillarless, made up the Impala line, still promoted as "America's favorite car." A Landau coupe also was available but sold sparsely. Only 2,465 were produced.

The 1975 Chevrolet Impala four-door Sedan was the best-selling full-size Chevy that year.

Wearing its new roofline with larger rear door windows, pillared Impala sedans sold well, with 91,330 built. Facing its final season, the Bel Air line included nothing other than a four-door sedan, which had a lot more trouble finding customers. Total sales of full-size models continued their downward slide, reaching about half their 1973 total.

All Chevrolet passenger cars got a "GM Efficiency System" that included a catalytic converter and electronic High Energy Ignition system. Installation of the "cat" permitted engine recalibrations which, in many cases, brought improved gas mileage and durability. The full-size selection included three station wagons: Caprice Estate, Impala, and Bel Air, each with either two or three seats.