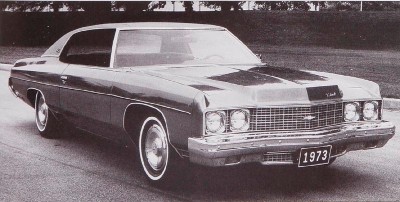 Front bumpers on the 1973 Chevrolet Impala and other full-size Chevys protruded because of the new federal mandate to withstand a 5-mph impact.

Apart from Corvettes, the 1973 Chevrolet Caprice Classic was the only convertible in the Chevy lineup that year; the bow-tie division built 7,339 of the $4,345 open-top model. Caprice was promoted in ads as "the uppermost Chevrolet." No more Biscaynes were built, making Bel Air the base model and Impala the mid-range, with Caprice presiding at the top of the pile.

Station wagons were absorbed into passenger-car lines, so the top-line wagon was called the Caprice Estate, and the Biscayne-based Brookwood disappeared. Except for wagons, all Caprice models came with standard rear fender skirts to accentuate the car's sweeping lines.

Five-mph front bumpers now were required, but rear bumpers needed only to meet a 21/2-mph standard, so those were less obtrusive. Roofs were strengthened, and side door beams thickened.

Modified front-end styling included two different grille styles, plus the new bumpers and fender caps. Caprice grilles had a looser crosshatch pattern. Taillights were more square in shape, set into moderately restyled back bumpers. Following the tradition established years earlier, Caprices had three taillights on each side, whereas lesser models made do with two. The Glide-Away tailgate continued as an exclusive feature on full-size wagons.

Base engine remained a 250-cubic-inch six or 307-cubic-inch V-8, but full-size models might have a 350 V-8. Caprices could even get a 454 (215 or 245 horsepower). Chevrolet's original "small-block" V-8 was enlarged to 400 cubic inches, breathing through a two-barrel carburetor to develop a rather meager 150 horsepower. Six-cylinder engines were installed only in Bel Airs with column-shifted three-speeds. All full-size cars with a 350-cubic-inch V-8 or greater ran Turbo Hydra-Matic.

Fuel tanks held 22 gallons of gasoline -- and owners had to make frequent trips to the gas station for fill-ups, as these biggies were far from frugal. That little engineering imperfection would loom large when the gas crisis arrived late in 1973, and frantic motorists had to sit in long lines to get at the pumps.