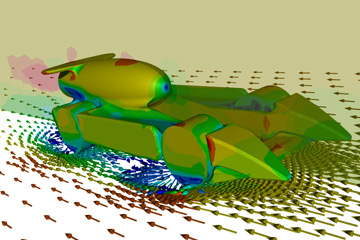 Just about every boy who was ever in the Cub Scouts probably made a Pinewood Derby racer at one point or another. A tradition in scouting since the 1950s, the project involves making a racecar out of a small, rectangular piece of wood. The wood is sawed and fashioned into an aerodynamic shape, painted and decorated, given wheels, axles and small weights and then raced downhill.

Pinewood Derby racers don't have engines, but instead use gravity to pull them down a small track on which several cars compete against one another. The idea behind the derby is to design the most aerodynamic and properly weighted car possible.

But probably more than a few Cub Scouts over the decades have wondered what the event would be like if the small cars had engines of their own. How fast could they go? What would that competition be like?

Fortunately, there is a type of racing out there that could be described as the "Pinewood Derby on steroids" -- CO2 racers, which are also small, wooden racecars where a propulsion system has been added. In this type of racing, the participant builds a small carbon dioxide cartridge into the car, which propels it down a flat, level track. They're fast, too -- on a 65.5-foot (20-meter) track, the cars can cross the finish line in just over a second, traveling at nearly 70 miles per hour (112.7 kilometers per hour)! But even with something to create motion, aerodynamics and weight still make a huge difference [source: Science of Speed].

Building a CO2 dragster can be a great project at schools because it teaches students about aerodynamics, as well as things like friction, inertia and mass. It can also be done as a competitive event or hobby.

In this article, we will discuss the ins and outs of CO2 dragster racing, and learn how to build the ideal racer.