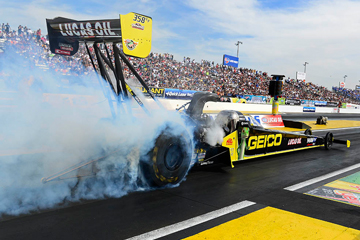 The basics of drag racing are indeed rather elementary. Everyone lines up and goes on the same signal, accelerating to a spot some distance away on a straight course, and whoever gets there first wins. That's consistent across all four National Hot Rod Association (NHRA) Mello Yello drag racing series: Top Fuel, Funny Car, Pro Stock and Pro Stock Motorcycle. The starting light, popularly known as the Christmas tree, flashes a series of amber lights to let the drivers get ready. At the end, there's a green light to go, but if anyone takes off too early, that's a foul and that also gets a red light. The distance varies depending on the specific series. Top Fuel cars and Funny Cars sprint to a distance of 1,000 feet (304.8 meters) to determine the victor.

There's a lot more to a race than just watching it, though. The National Hot Rod Association (NHRA) divides its race cars into categories, based on criteria such as engine type, the car's weight, acceptable modifications to the car, aerodynamics and fuel type. The fuel type is primarily what we'll be focusing on, since it's the main factor that differentiates Top Fuel dragsters. They're some of the fastest vehicles on the planet. In fact, just one of the eight cylinders in a Top Fuel engine makes as much horsepower as a NASCAR Sprint Cup car [source: McGee]. But Funny Cars are mechanically similar to Top Fuel cars, so to some extent, it's worth taking a look at both types.

Top Fuel cars get their power from custom engines that are 500 cubic inches and boast superchargers, making them capable of around 8,000-horsepower. Though some estimates go as high as 10,000-horsepower -- and there's a good reason for any discrepancies [source: Mazlumian]. Top Fuel engines can't be measured by a dynamometer, the machine that evaluates a car's horsepower and torque. So, Top Fuel power numbers are calculated by mathematical equations, which can leave some room for debate. These engines can't burn regular gasoline, or even race gas. They need nitromethane, a special kind of fuel, which is how these cars got the Top Fuel name. Their super powerful engines have to be fed with much more concentrated power, which is no accident. It's a complicated balance, requiring the cars to be tuned specifically for the fuel, and the fuel to be manufactured specifically for the cars. All the effort is worth it to the racers, who travel at previously unheard-of speeds, and the fans, who love the flames that occasionally blast from Top Fuel dragsters' tailpipes.