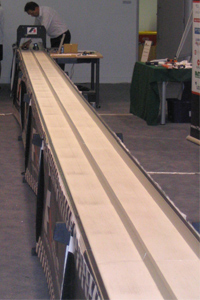 This is the track used in the F1 In Schools competition.
Photo courtesy of Nuclear Froggy

While a Pinewood Derby car is simply put on a downward-sloping track and released, CO2 dragsters have agents of propulsion that launch them forward in a (hopefully) straight line on a level track. The "engine" that propels the tiny car in this case is a carbon dioxide cartridge, also known as a soda bulb.

The CO2 cartridge is a small, metal cylinder filled with carbon dioxide that has been highly pressurized and sealed. At the flick of a button -- we'll learn how they're launched in a minute -- the gas is released, propelling the dragster forward.

On many dragster kits, the hole for the cartridge comes already drilled, and when sculpting the wood the designer simply works around it. On other kits, the hole must be drilled out manually.

Once the cars are ready to race, the sealed cartridge is inserted and they are placed on the starting grid. Often, they're hooked up to a device called a launch pod, which punctures the cartridges of two or more cars at the same time. These devices can also be built by hand using some wood and nails to puncture the CO2 canisters [source: Science of Speed].

Since the cartridges contain an equal amount of gas being released at the same speeds, the car that wins the race is the one that is the lightest and most aerodynamic. Think of it as a drag race between two cars with the same engine but different bodies.

In terms of physics, the rapidly escaping gas illustrates Newton's Third Law of Motion -- for every action there is an equal or opposite reaction. The rearward motion of the gas pushes the car forward in this case, overcoming inertia or the resistance to movement.

Whether it's for a science class or just for fun, many hobby shops and Web sites sell tracks to race them on, timers and other tools to make building and racing dragsters easier. Keep in mind that building these fast little cars can be just as addicting as any kind of racing -- but on a much smaller budget.

For more information about CO2-powered dragsters and other related topics, follow the links below.