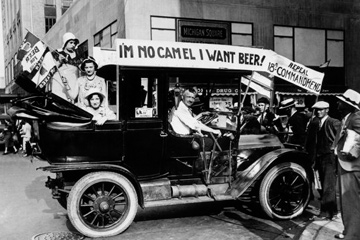 Prohibition protesters parade in a car emblazoned with signs and flags calling for the repeal of the 18th Amendment. See more pictures of Prohibition.
Archive Photos/Getty Images

It's a cliché that necessity is the mother of invention, but it's clichéd because it's true. Imagine that you live in a rural Southern town during the Great Depression. Crops have failed and work is scarce. The only thing you have is your car -- and it's a sweet one. It may just be an old Ford, but you've spent plenty of time working on it. You've sweated over the engine in the hot Georgia sun, scraping your knuckles while wrenching parts into place so many times that it seems like the engine is covered in equal parts blood and grease. That car is your world. It's your ticket to a better life.

Not only is the car a well-oiled machine, but you're also a great driver. In loosely organized races through the pastures and back roads of the country, you've beaten all comers -- or at least given them a run for their money. Now your skill has caught the eye of some connected individuals, and they have a job for you.

Even though prohibition is over, many towns in the South are dry. Selling liquor is illegal. And, even in parts where liquor can be sold, if you sell it without the authorities knowing, you don't have to pay taxes. That's more money in your pocket. So now you've got a job running homemade liquor -- moonshine -- into dry towns. You've got to get the liquor to the buyers and avoid the police. If you can't avoid the police or the federal revenuers, you've got to outrun them. It's just the job you and your car were made for.

Running liquor wasn't uncommon during the 1920s and '30s. But here's where the story takes an interesting twist -- the same men who used their skills as drivers and mechanics to outrun the law used those same skills to found one of the most popular sports in the country: NASCAR. The need to make a living and the love of fast cars combined in the sport with one of the most colorful backgrounds imaginable. Trust us -- football and baseball didn't evolve from a heady combination of the need to outsmart police and the ability to have a great time doing it.

Those original cars raced on weekends in small towns throughout the South and spent the rest of their time as whiskey cars; souped up and filled with illegal liquor, they toured the South making deliveries and avoiding the law. The characters and technology behind the precursors to today's NASCAR race cars are as intoxicating as the liquor they carried. 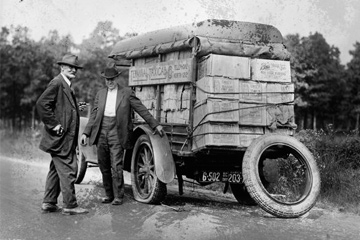 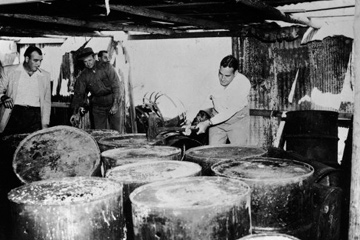 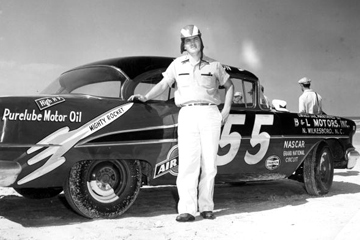 Whiskey car drivers tended to be young men. While it's easy to picture a 20-year-old outrunning the cops in a whiskey car, think of someone even younger. Boys as young as 14 would run moonshine. As part of farm families, those boys were already used to operating and working on farm machinery, and using cars and trucks for work.

Running moonshine was often a family business. The best drivers had a mix of street-smarts, nerves and local knowledge that allowed them to outwit law enforcement. Robert Glenn Johnson Jr., better-known as Junior Johnson, said that he'd put a light and sirens on his car. When he was approaching an area where he knew the police had put up a roadblock to catch moonshiners, he'd put the lights and siren on. The police, thinking he was a cop, would take the roadblock down, and Johnson and his illegal cargo would go on their way [source: Hot Rod Magazine].

Since revenuers were often not from the areas where they worked, and whiskey car drivers were, they often knew the roads better. That allowed them to take back roads and shortcuts, to double back and hideout when they were being pursued. Drivers had their own signature moves, too. One of the most famous is the bootlegger's turn. It's where the moonshiner runner will quickly make a 180-degree turn and head off in the opposite direction before the police can turn around. Familiarity with the roads also let whiskey car drivers, bootleggers and moonshiners drive faster than their pursuers, since they knew just how fast they could take the local curves. Still, many drivers died after pushing their cars just a little too far.

Whiskey car drivers also had intimate knowledge of their cars, having worked on and modified them themselves, for the most part. Law enforcement officers knew their cars well, but didn't have the advantage of designing the cars specifically for the type of driving and the terrain they'd encounter while trying to chase down bootleggers.

While bootlegging, moonshine running and whiskey cars continued into the 1970's in parts of the South, what many people consider the golden age of the activity ended with World War II, when most of the drivers joined the armed forces. But when they came back, they found more legitimate ways to use their considerable talents. 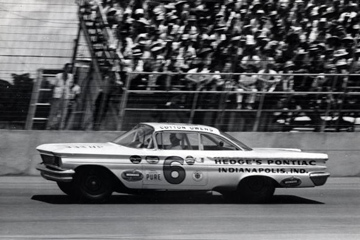 For more information about whiskey cars, NASCAR and other related topics, follow the links on the next page.

How Monster Jam Works
What is the history of stock car racing?
What were the stock car aero wars?