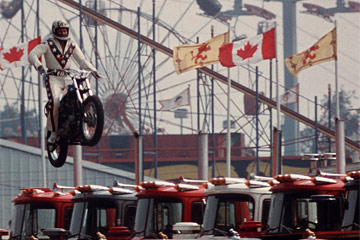 Go find someone (preferably a male) who grew up in the '70s, and more likely than not, you'll see it. It's a badge of honor for kids of the seventies, who, in between cutting up Stretch Armstrong and having their minds blown by "Star Wars," idolized a daredevil who literally leapt into the public consciousness in 1967. It's an Evel Knievel scar.

Long before Johnny Knoxville and Steve-O inspired Gen-Y slackers to try strange stunts and head for YouTube, Evel Knievel-inspired stunts that kept emergency rooms in the 1970s humming. And while the kids of the '70s are sitting in offices and boardrooms now, underneath the business suits and ties, many still have the scars of an Evel Knievel imitation stunt gone awry.

Of course, ending up with an injury while playing Evel Knievel didn't necessarily mean that the attempt wasn't a success. After all, Knievel himself ended up in the hospital after many of his stunts, and he even said that he was "nothing but scar tissue and surgical steel" [source: Severo]. But in addition to making an indelible impact on a generation of kids, Knievel also made an impact on popular culture. His stunts broke television viewership records as often as he broke bones. He inspired songs, merchandise and imitators and he even helped introduce motorcycles to mainstream American audiences.

But while Knievel is well-known for his stunts and fame, his life had darker patches as well. Years of abuse took their toll on Knievel's body, and his personal life seemed to endure almost as many crashes as he did. When it comes down to it, Evel Knievel was as much a daredevil in his personal life as he was in his professional one.

There's a lot more to Evel Knievel than what's on vintage lunchboxes or tributes on shows like VH1's "I Love the 70s." So keep reading to find out more about Evel Knievel, his life and his death-defying stunts. 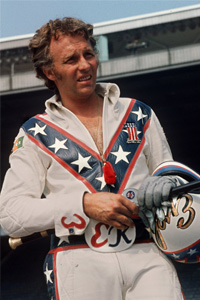 Evel Knievel started life as Robert Craig Knievel. He was born in 1938 and raised by his grandparents in Butte, Mont. His parents split when he was young and had little contact with him.

According to many interviews Knievel gave, he was rechristened "Evil Knievel" by local police officers who arrested him for stealing hubcaps when he was young. Later, Knievel legally changed his name to Evel, switching the "i" for an "e" because "he thought it looked better" [source: Severo].

Knievel's early brushes with the law show that his daredevil side showed itself early, but not always productively. He claimed that he stole his first motorcycle, a Harley-Davidson, when he was just 13 and was inspired by Joie Chitwood, a legendary stunt-car driver. Still Knievel wasn't someone who stood out only because he acted up. He was also an accomplished high school athlete and a professional and semi-pro hockey player. In the 1950s, he enlisted as a paratrooper in the army and made more than 30 jumps.

His professional daredevil days began when he started running a motorcycle shop in Washington state. To attract customers, Knievel said he started jumping things on his motorcycle. His first jump saw him clear 40 feet (12.2 meters) of parked cars; however, he didn't go quite far enough as he landed on the box of rattlesnakes (just in front of the tethered mountain lion) at the end of the line. The jump led him to form a group of motorcycle stuntmen which crisscrossed the western United States before striking out on his own. For his first large-scale solo jump, Knievel announced that he would jump the fountains in front of the Ceasars Palace in Las Vegas, Nev.

On New Years Eve, 1967, Knievel and his bike mounted a ramp in front of Ceasars Palace and 15,000 spectators. He had to clear 151 feet (46 meters). As he revved his engine, he said his customary prayer: "God, take care of me. Here I come…" and with that, he and his motorcycle shot into the air. 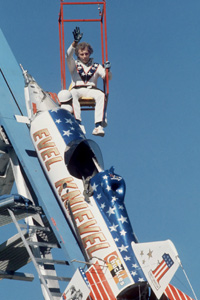 Evel Knievel waves as he's lowered to his rocket prior to his failed attempt at a highly promoted leap across Snake River Canyon in Twin Falls, Idaho, on Sept. 8, 1974.
AP Photo

While Knievel cleared the 151 feet (46 meters) of fountains at Caesars Palace, he failed to stick the landing, vaulted over the handlebars of his motorcycle and slid 165 feet (50.3 meters) on concrete before finally coming to a rest. The jump left him with a broken skull, pelvis and ribs. He spent nearly 30 days in a coma and millions of people watched the accident on television.

The fact that the jump wasn't technically successful didn't seem to matter to Knievel. The jump (and the crash) had won him legions of fans as well as regular appearances on ABC's Wide World of Sports. Between 1973 and 1976, Knievel appeared on the Wide World of Sports seven times, jumping everything from wrecked cars to double-decker buses. His jumps were some of the highest rated episodes in the program's history.

In 1974, Knievel was paid $6 million dollars to jump the Snake River Canyon in Idaho. For the jump, which required him to clear 1,600 feet (487.7 meters), he used a specially made rocket-propelled motorcycle, dubbed the "Skycycle." While the launch portion of the jump went well, the parachute on the jet-bike deployed too early, causing the entire rig to float down into the canyon.

Knievel's next stunt was also unsuccessful, and one of the most famous of his career. In London's Wembley Stadium, Knievel was slated to jump 13 buses in front of 70,000 fans. On his Harley-Davidson, he hit the ramp at 90 miles per hour (144.8 kilometers per hour), and barely cleared the 13th bus. But once again, the landing wasn't so smooth. But what shocked his fans the most wasn't the spectacular jump or even the grisly crash -- it was what Knievel said only moments after the impact.

So, what was on the daredevil's mind just minutes after the crash that left him with a broken hand, pelvis and compressed vertebrae? 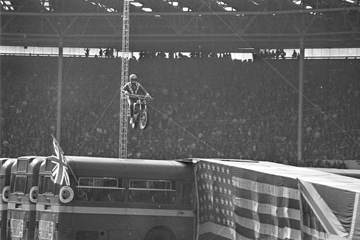 Evel Knievel approaches the landing ramp with his motorcycle during his unsuccessful effort to leap over 13 buses in London, England, on May 25, 1975.
AP Photo

A crowd of 70,000 at London's Wembley stadium, plus millions more watching on ABC's Wide World of Sports, saw Evel Knievel jump 13 buses, only to crash on the landing and slide across the stadium floor with his Harley-Davidson motorcycle slamming into him an instant later. As medics rushed to the downed daredevil, he insisted on leaving the arena on foot and he asked for a microphone.

Still reeling, he told the crowd that they were "the last people in the world who will ever see me jump. I will never, ever, ever, ever jump again. I am through" [source: Laracy]. Then, despite his horrible injuries, Evel Knievel walked out of the stadium.

Like a lot of Knievel's landings, his words didn't stick either. Just five months later he successfully jumped 14 Greyhound buses at Kings Island Amusement Park in Ohio -- a jump that remains the highest-rated telecast of ABC's Wide World of Sports.

While Knievel and his bike were soaring, his popularity was, too. Knievel claimed that the Evel Knievel toys grossed more than $300 million. Two movies were made about him, and he starred as himself in another. Of his seven jumps on ABC's Wide World of Sports, five were successful.

Still, his career had taken a toll on his body. Knievel reportedly broke more than 40 bones in his lifetime. And then, in 1977, he was convicted of beating his former press agent and spent six months in jail. Financial mismanagement meant the daredevil lost much of his earnings. In 1980, his health forced him to retire from performing, although he still made personal appearances and promoted the career of his son, Robbie Knievel, who followed in his dad's footsteps. In addition to enduring hard crashes, Evel Knievel endured some hard living, too. Always a heavy drinker, Knievel suffered from hepatitis C, and even underwent a liver transplant in 1999.

On Nov. 30, 2007, the man who had defied death by jumping over canyons, buses and tanks of sharks simply couldn't defy it any longer. At age 69, Evel Knievel died after battling diabetes, an incurable lung condition and the effects of a career spent making hard landings. He was survived by four children, 10 grandchildren and one great-grandchild.

However, Knivel's legacy goes well beyond family. References to Knievel have shown up everywhere from "The Simpsons" to a Kanye West video. MTV's "Jackass" is a direct descendant of Knievel's showmanship -- and the knowledge (that Evel Knievel cultivated), that some people watch a stunt to see it succeed while others watch to see it fail.

In 2005, Ideal Toys re-released the Evel Knievel Stunt Cycle, allowing a generation of people who grew up making a tiny Evel Knievel do death-defying stunts on their living room floor a chance to share that form of play with their kids. Knievel's motorcycle, a 1972 Harley-Davidson XR-750, is on display at the Smithsonian's National Museum of American History. Because of his influence on a generation of risk-taking athletes, Knievel is sometimes called "The Father of the X Games." Each summer, his life is celebrated with incredible motorcycle stunts at Evel Knievel Days in Butte, Mont.

But, kids who grew up in the 1970s don't need to look far to see the impact Evel Knievel made on American life. They can see it in the scars on their elbows and knees and remember exactly the way it felt to fly through the air just like Evel Knievel -- even if they missed the landing.

For more information about Evel Knievel and other daredevil related topics, jump over to the next page.

Evel Knievel's son, Robbie Knievel, has followed his father's career path and he's a motorcycle daredevil, too. So far, Robbie has successfully performed all but two of Evel Knievel's stunts -- the Wembley Stadium jump and the Snake River Canyon jump [source: McMillan].