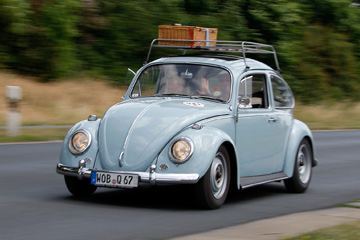 Although no cars are completely airtight, some are built a little more airtight than others. See more pictures of concept cars.
AP Photo/Kai-Uwe Knoth

There are several ways to know if you have an airtight car -- and none of them are pleasant. That's because the passenger compartment of your car is not designed to be airtight. Fresh air comes in the front of the car, circulates through the passenger compartment and leaves the car through exhausters in the rear. If the cabin of a car or truck were truly airtight, the windows wouldn't defrost, it would get unbearably hot in there and anyone inside wouldn't be able to breathe.

When diagnosing car problems, people might say "airtight" when what they mean is "watertight." Sitting inside a car in the pouring rain or a car wash would quickly tell you if you had any leaks in the door or window seals or even unsealed body seams. The vents that allow fresh air to enter and exit have been designed to keep water out and rarely cause auto problems.

"Airtight" could also refer to a car's aerodynamics, especially if you're diagnosing car trouble. Anywhere water can get in, so can air. Each little leak in the seals disrupts the flow of air around the vehicle which creates drag. That's why automobile designers make every effort to only allow in just enough air to cool the engine and ventilate the cabin, while directing most of the air around the car. Though air leaks might not cause major car trouble, they can be an annoyance when every little bit of aerodynamics counts -- like when hypermiling or racing, for instance.

And while no car is perfectly airtight (with good reason, remember), some have come closer than others. The old Volkswagen Beetle was famous for this, thanks to a clever advertising campaign where the car was driven straight into a lake. The car floated away as the driver leaned out of the window and asked, "Now, what other car gives you this kind of quality for this kind of price?" This demonstration showed that the doors and body were well-sealed; however, the problem was that the doors could be difficult to close since they would pressurize the cabin momentarily. And if you did manage to get the doors closed on the first try, you could feel the pressure in your ears. But again, no car is perfectly airtight.

Top 10 Signs of Alternator Problems
Will my car's interior get noisier over time?
Top 5 Signs of Engine Trouble