How the Audi R8 Works 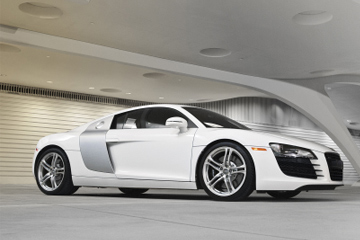 Image Gallery: Exotic Cars The Audi R8 is about half the price of most exotic supercars. See more pictures of exotic cars.
Audi of America

It's tough to find someone who wouldn't like an exotic supercar. Even if you don't know much about cars, you'd probably enjoy the envious looks as you cruised down the street ensconced in the coddling cabin inside a futuristic automotive shell. And if you had the chance to open the throttle, to feel those 400-odd horses take off while the car clings to the curves -- well, you don't need to be a car enthusiast to appreciate that.

Now, imagine you could have all that at about half the price of most exotics. You just imagined the Audi R8.

The R8 is the marquee car from German car maker Audi, which has recently been enjoying a successful sales run, even in the recent economic downturn. That's due in part to the halo effect of the R8, a supercar built to showcase the best of what Audi, and its parent company Volkswagen, can do.

VW owns a controlling stake in Audi, and in Lamborghini, the vaunted Italian supercar company. By combining Audi's first-class designs with Lamborghini performance parts, Audi has made the R8 capable of straddling the line between high-priced supercar and luxurious daily driver. In essence, the Audi R8 gets you Lamborghini-like performance at Porsche 911 Turbo prices, plus one of the most admired exterior designs in the industry. When you add in Audi living up to its reputation of building what some consider to be the finest automotive interiors in the world, it's not surprising that the R8 is quickly becoming the smart car to drool over.

Keep reading to learn the more about the Audi R8 -- including its famous Quattro all-wheel drive system and Lamborghini engines.

You can argue that the Audi R8's powerful engine gives its owners something of a conundrum. After all, if you have an R8, you probably want people to be able to see you in it. One the other hand, if you let the R8 run -- and going fast is pretty much the point of buying a supercar -- you'll just be a blur. Decisions, decisions.

With either engine, a six-speed gated manual transmission is standard, but Audi's R tronic transmission is an option. The R tronic is a single-clutch automated manual gear box. That sounds like a contradiction, but in essence, the R tronic operates like an automatic for the driver while it works like a manual for the car. Drivers can either let it shift automatically, or use paddle shifters on the steering wheel to select each gear.

What's perhaps the biggest standout feature of the R8 engines isn't how powerful they are, but how they fit in the car. Both engines are mid-mounted. That means that they sit between the two axles -- right behind the seats. While that may seem weird -- after all, we're accustomed to cars with front-mounted engines -- moving the engine rearward helps give the R8 its incredible handling abilities.

Keep reading to see how this Italian-German supercar mashup handles itself when the road gets twisty.

At the 2009 Frankfurt Motor Show, Audi unveiled its e-tron concept, which is an all-electric sports car. Though it's electric, its weight is distributed like the R8's, so it should have similar handling capabilities. While the e-tron looks like the R8, it's actually smaller and will likely reach production in 2012 as the Audi R4 e-tron. 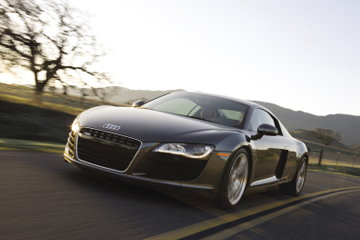 The Audi R8 is known for its superb handling characteristics. While part of that is due to its mid-mounted engine, that's not the entire story.

To understand how a mid-mounted engine helps improve a car's handing, stand up. When you stand up straight, most of your weight is centered over your feet, making you stable and secure. Now, lean way forward, and try to walk. You start to teeter, and it's tougher to keep control -- especially if you're trying to walk fast.

It's the same thing with cars. A car's engine -- even if it's an all-aluminum super-light engine like the one in the R8 -- is by far the biggest chunk of weight the car carries. If you can keep that weight low and centered between the car's wheels (which act as its "feet"), then the car is that much more stable, especially at high speeds.

But the R8 has another handling trick going for it. The R8 comes standard with Audi's famous Quattro all-wheel drive system. Now, you might be thinking that all-wheel drive is best saved for snowy days, but it also gives a car stronger handling when the weather is dry.

All-wheel drive means all-wheel fun on dry days because it spreads the car's power through all four wheels. That means the car can shift power to the wheels that need it through the curves. On the R8, up to 35 percent of the power can be shifted to the front wheels, giving it better grip no matter the weather.

What may surprise you about driving the R8 is that it's actually comfortable. A lot of exotics are engineered for the track first and the road second. The R8 actually does well on both, which makes it slightly more practical than your average supercar. Of course, supercar lust isn't built on practicality. A lot of it is built on looks.

Keep reading to learn more about the R8's exterior styling, including the new R8 Spyder. 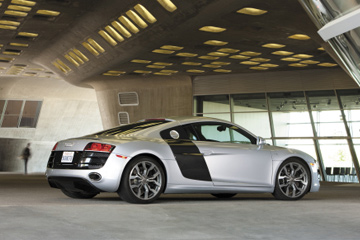 The Audi R8's side blades are swaths of carbon fiber that run directly behind the passenger doors.
Audi of America

With its sculpted sheet metal, the R8 certainly looks the part of an exotic car. But it has a couple of extra features that most supercars don't have.

From the front, the most noticeable extra feature the R8 has is its headlights. Of course, all supercars have headlights, but the R8 has a row of LED lights running through the bottom of its headlight assemblies. The LEDS are daytime running lamps, and they serve not only as an extra measure of safety but also to highlight and emphasize the cat's-eye shape of the headlamps. It's a look that Audi has started to carry through its entire vehicle line.

The headlamps frame an oversized grilled that reaches down through the front bumper. It's an interesting feature -- not because having headlamps on either side of a grille is unusual, but because grilles are typically used to allow air in to cool the engine. With the R8's engine nowhere near the grille, having one in the front is a mainly a stylistic choice.

Another stylish feature is the R8's side blades. These are swaths of carbon fiber that run directly behind the R8's passenger doors. Carbon fiber is a super-light, super-rigid material. It's also super expensive. It's the preferred material for F1 cars because it's so strong yet light. Using pieces of carbon fiber is becoming more common on road cars. Putting it right behind the door openings helps the R8's body regain some of the strength that's lost by having doors. The R8 also has a carbon-fiber engine cover and carbon-fiber side mirrors.

While the R8 is a good looking coupe, for 2010 Audi introduced the R8 5.2 Spyder, which has a soft top. Having a soft top was a performance choice -- convertible hard tops often add too much extra weight. The R8 Sypder's soft top only adds an additional 66.14 pounds (30 kilograms). However, the R8 Spyder doesn't have the coupe's distinctive carbon-fiber side blades.

Now, while we said the Audi R8 was slightly more practical than the average supercar, that doesn't mean you'll be able to drive the soccer carpool in it.

Inside, the R8 has a luxurious interior, but it only seats two. Plus, the engine is directly behind the seats -- so there isn't a lot of in-cabin storage available, either.

But those concerns really don't matter for supercar shoppers. What does matter is that the R8's interior is swathed in the high-quality leather Audi is known for, with precise stitching and tasteful accents. However, just because the interior is luxurious doesn't mean it's not built for performance as well.

Take the seats: While they're posh, they're sculpted sport seats as well. They're engineered to hug the occupants' hips and shoulders, keeping them secure through turns. You may not think that matters -- after all, how hard can it be to sit in a chair? But at the speeds the R8 is capable of reaching it would be tough to hold the car through a turn if you had to also worry about holding your rear end in the seat. And, if you have an R8, with either one of its powerful engines, throwing it through turns at high speeds is exactly what you'll want to do.

For more information about the Audi R8 and other supercars, follow the links on the next page.

The R8 has already appeared in many movies, starting with 2004's "I, Robot" and including films like "Iron Man" and "17 Again." The R8 even made an appearance in 2009 as a Decepticon in "Transformers: Revenge of the Fallen."