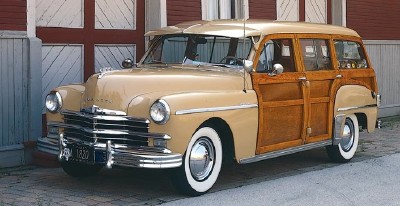 There's no arguing with the numbers when it comes to the 1949 Plymouth lineup.

Even though Plymouth introduced its steel-bodied Suburban station wagon late in the 1949 model year, it sold 19,220 of them. Meanwhile, the traditional higher-maintenance wood-bodied wagon -- available from the start of the selling season -- drew just 3,443 orders. Is it any wonder, then, that the "woody" was pruned from the Plymouth lineup after 1950?

It cost at least $2,372 to secure the services of a 1949 Plymouth Special DeLuxe wagon. Sub­urban prices started at $532 less, but the difference bought more than 7.5 inches of additional wheelbase and two extra doors. The Special DeLuxe seated up to eight passengers with its third-row seat installed.

After an extended run of 1948-style Plymouths, the "true" 1949s arrived in the spring with fresh, but somewhat frumpy, styling. Even the U.S. Body and Forging wagon body was modernized, with a steel roof replacing the wood-and-fabric top of years past.

The redesign also includ­ed a spare-tire hatch incorporated into the steel lower tailgate. A 218-cubic-inch "flat­head" six returned under­hood, but with a two-horsepower boost to 97 horses.

The 1949 Special DeLuxe had seating for up to eight with a third row installed.

When photographed, the well-optioned car seen here was owned by John Slusar, of Milwaukee, Wisconsin. Though mostly stock, he took a few liberties in its restoration, such as adding full carpeting and selecting a paint color not offered on '49 wagons. In 2003, he sold the car to Carl Germain, of Syracuse, New York.