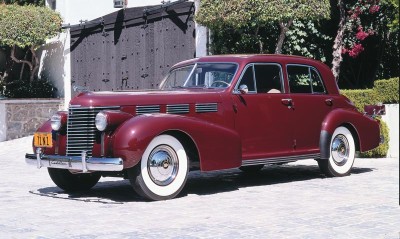 Bill Mitchell, designer of the 1938 Cadillac Sixty-Special, had been with General Motors's Art & Colour Section less than a year when he was promoted to head Cadillac and LaSalle styling. The Cadillac Sixty-Special was his first project and it proved the wisdom of his promotion. It was one of the great designs of Thirties and a milestone for Cadillac styling.

It has been estimated that Mitchell, who would later head General Motors's design department in the Sixties and Seventies, determined the appearance of 72 million cars. These included such clean designs as the 1963 Buick Riviera, 1963 Corvette Stingray, and 1966 Oldsmobile Toronado. But the 1938 Sixty-Special remained one of Mitchell's favorite designs. The Sixty-Special started out as a LaSalle sport sedan. Midway through the project, GM realized the car would be too expensive for a LaSalle and it became a Cadillac. Larger and more expensive than Cadillac's entry-level Series 60, but cheaper than the less-flamboyant large Cadillacs, the Special's price was $2,090. Built on a double-drop frame, it was three inches lower than other Cadillacs. This low profile improved handling and allowed for the elimination of running boards -- a first for a car from the Big Three. The Sixty-Special was the first sedan with a fully integrated trunk. Previ­ously, sedan trunks were upright boxes grafted on to the rear of the car. Plus, the Sixty-Special's fenders stretched rearward to make the trunk seem even more a part of the car, a look that is still with us today. The distinctive roof looked more like a convertible top than a Thirties sedan roof. The side windows were large with thin, elegant chrome frames instead of the normal thick, painted stampings. The effect was similar to that of the postwar hardtop.

Chrome trim was kept to a minimum. The car was sporty, daring, yet elegant. Cadillac brass was worried that it might be too radical for the ultraconservative American luxury market. Their fears were unfounded; the Sixty-Special outsold every other Cadillac line in its first year. Sixty-Special features were adapted to other General Motors cars and soon copied by competitors.

Power was provided by an L-head V-8 putting out 135 bhp. This smooth and durable engine propelled Cadillacs from 1936 through 1948 (and it served reliably in tanks during World War II). Power was transmitted by a tough, quick-shifting three-speed gearbox that was later a favorite of hot-rodders. For 1938, all Cadillacs moved the shifter from the floor to the steering column.

Richard Stanley, of Los Angeles, California, owns the restored Sixty-Special featured here. Mr. Stanley, a realtor, used the commission he made selling a 1938 house to buy a 1938 car. The car was a basket case when purchased, but is now rated a Classic Car Club of America Premier Car. It has also taken best in class at the Palos Verdes Concours d'Elegance.