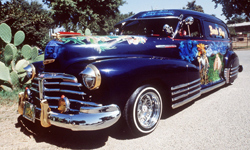 Chevrolets were the original car of choice for lowriders for a few reasons. First, in the 1930s and 1940s, Chevrolets were less expensive than many other cars (including Fords), which put them in reach for more of the Mexican immigrants who were launching the lowrider culture. Second, many lowriders preferred the looks of Chevys, and in 1939, according to many pachucos, Chevy had a winning design. The 1939 Chevy has a sweetly sloping rear end, clean, prominent grille and aggressive fender flares -- exactly what many lowriders were looking for. Lastly, Chevy suspensions were easy to modify, giving the cars the stance the lowriders were after.

Few of those original 1939 Chevy lowriders survive today, but a modern example of the style is Joel Garcia's 1939 Ford Master Deluxe, which was featured in Lowrider Magazine. Joel calls the car Precioso, which means precious, and it's not hard to see why. One feature that Joel added to the '39 Chevy that the original pachucos didn't have is air bags. No, not the kind of air bags designed for occupant safety -- these air bags are part of the suspension and are used to raise and lower the car at the touch of a button. This is one 1939 Chevy that's come a long way since pachucos lowered their cars by putting bags of sand in the back.