Hennessey, a boutique automaker based in Sealy, Texas, mainly used components from other manufacturers to create its super-fast Venom GT. That's fine, according to the generally accepted definition of a production car: As long as a specific quantity -- at least 30 -- are built. However, 30 Venom GTs don't exist yet, and the company says it plans to build only 29. So a hand-built vehicle consisting of a stretched Lotus Exige body and a 7-liter, Corvette Z06 engine, boosted by two turbochargers, may or may not be a legit contender, depending on who you ask. On Feb. 14, 2014, the Hennessey Venom GT set out to take down the Bugatti Veyron Super Sport, anyway.

The Hennessey Venom GT is so fast it needed to borrow real estate from NASA. That's right. The space shuttle's landing strip was the setting for the Venom GT's 270.49-mile-per-hour (435.3-kilometer-per-hour) run. However, John Hennessey, the company's founder, said that NASA only allowed one run, making it ineligible for the Guinness record based on the back-to-back run standard. Even if the result isn't official, the Venom GT's GPS-qualified run stole some of the Veyron Super Sport's thunder.

The thought of buying one of these cars, especially one from a boutique automaker such as Hennessey, is mind boggling. I'm the type of girl who feels special if the bartenders recognize me at my favorite bar; I couldn't imagine paying hundreds of thousands of dollars for the privilege of being a VIP with one of the most exclusive automakers in the world. And even though I've spent a little time on some of the fine tracks of the Midwest, I just can't fathom that kind of speed. It's faster than I fell when I went skydiving. The reason we mere mortals care about such rankings, I think, is because it's a way to feel familiar with things most of us will never experience. And perhaps we all like to see the Bugattis of the world taken down a notch or two. 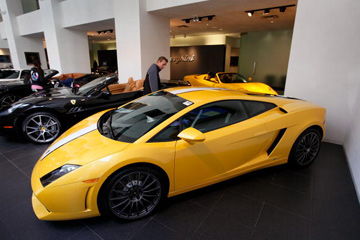 How much does it cost to lease a Lamborghini? Read about how much money you need to lease exotic cars like Lamborghinis.