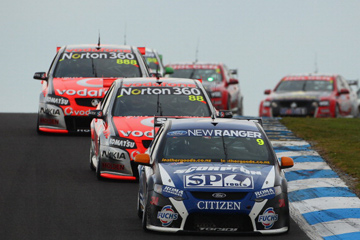 If you haven't heard of V8 Supercars, or if you think they're just a type of car with a V-8 engine, it's probably because you don't live in Australia -- or New Zealand or Abu Dhabi or one of the small but growing number of countries where V8 Supercar racing has become one of the hottest motorsports since, well, NASCAR in the U.S. Like NASCAR, V8 Supercar races use modified versions of actual production automobiles, in this case the Holden Commodore and the Australian version of the Ford Falcon, to even the advantage between contenders in grueling races that can run several hours and hundreds of miles in length. Although there are several racing series involving V8 Supercars, the largest and most popular is the V8 Supercars Championship Series. These races are held as part of multiple events -- 15 in 2012 -- and take place at a number of tracks, including events in every state in Australia.

The Fédération Internationale de l'Automobile (FIA) is also known for overseeing Formula One racing, which includes the Grand Prix series of events. If you think of V8 Supercars as the NASCAR of Formula One Races, you're not far off the mark, which would make the V8 Supercars Championship series the Grand Prix of stock car races. As with NASCAR, the "stock" cars used in V8 Supercar racing are customized, but there are strict rules for that customization, stricter even than those for NASCAR. The idea is that the advantage goes to the best driver, not to the most expensively built car, and the rules for customizing the cars guarantee that no one car or make of car will dominate the event. The engines, the body, the weight, the suspension, the tires, the brakes -- all are tightly regulated by the V8 Supercar Project Blueprint.

In the following pages we'll show you how V8 Supercars got started, how the Championship Series works and when it will be arriving at a major racetrack in the United States.