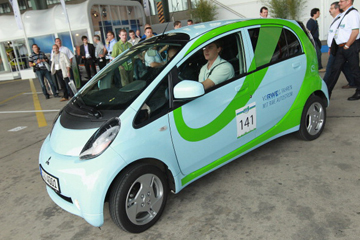 The Mitsubishi iMiEV electric car -- which is certainly diminutive in size -- is absolutely huge when compared to the world's smallest electric car.
Sean Gallup/Getty Images

Even though they're getting bigger, when most people think of electric cars, they think of a compact model. The Nissan Leaf, for example, is an electric car that, though it has room for five and a hatchback, is not exactly commodious. The Mitsubishi i, is only 62.4 inches (158.5 centimeters) wide [source: Mitsubishi]. Keeping an electric car small makes sense: the smaller the car is, the less it weighs, and the more range can be extracted from the battery pack.

But it is possible to take the less-is-more electric aesthetic a bit too far.

Scientists working in Switzerland and the Netherlands have created what can be called the world's smallest electric car. Don't go looking for passenger or cargo volume numbers, though. And its range probably won't be enough to get you to work and back, though it does have standard four-wheel drive.

The world's smallest electric car is actually a custom-designed molecule. That's right -- it's a car that you need a microscope to see. On the plus side, parking it is a cinch.

The molecule has a stem with four branches. It sort of looks like the letter H. Each branch rotates, acting as wheels for the car. The power for the car comes from a scanning tunneling microscope. When the tip of the microscope, which is only as big as a single atom, comes near the electric car molecule, electrons jump from the microscope to the car. As the wheels absorb the charge, they change shape in a rolling motion, causing the entire molecule to move. Each charge allows the car to go about six billionths of a meter. And, in order for the charge to work, it needs to be administered in a vacuum with a temperature of minus 446.8 degrees Fahrenheit (minus 266 degrees Celsius).

So, what's the use of this electric car? The scientists aren't sure yet. But they think it signals a new path in nanotechnology, which is the manipulation of matter at extremely small scales. While most technology starts out large and gets progressively smaller -- like how the original computers that took up entire floors of buildings turned into the smartphone that fits in your pocket -- nanotechnologists look to start small (actually, very small). By manipulating matter and creating new molecules, they hope to create new machines, proteins, organic matter and other materials. We might not be able to ride in the world's smallest electric car, but it could eventually be the basis for other technological advances.

Just don't forget where you parked it.