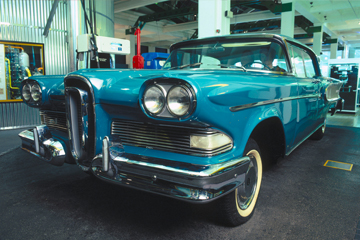 The Edsel was supposed to be everything American car buyers wanted — "the car of the future." However, for many, many reasons, it was a terrible flop.
SSPL/Getty Images

Shop for a car today and you'll likely find one that feels like it was made just for you. Want the high seating position of an SUV but the footprint of a compact car? Check out a subcompact SUV like the Honda HR-V. Want good fuel economy and unbridled luxury? Luxury hybrids like the Lexus RX 450h are there for you. Want to go off-road in your convertible? The Jeep Wrangler lets you put the top down no matter how rough the trail is. Having so many options should limit the number of car models that are absolute failures, right? Well, that wasn't the case with the 1958 Ford Edsel.

Ford dubbed Sept. 4, 1957, the day the Edsel debuted, as "E-Day" and spent the year leading up to it pushing a teaser campaign for the new brand and the new car. At launch, Ford made 18 different versions of the Edsel available — an unheard-of move at a time when most car companies offered just a few models. The Edsel was supposed to be everything American car buyers wanted; however, it was a terrible flop.

Ford started developing the Edsel in 1955, based on polling data from car shoppers — but unfortunately, the company disregarded much of the data from the polls. Ford's marketing department also overpromised on the Edsel. That yearlong teaser campaign had whipped the public into a frenzy, leading everyone to expect the car of the future — something the Edsel clearly was not.

The Edsel was saddled with quality and reliability issues from the very beginning. Its price was another sticking point: It started at $2,500 and topped out at $3,800, which was much more expensive than other Ford models at the time [source: Carlson]. Adding to the Edsel's woes was the fact that it debuted at the beginning of a recession. An expensive Ford didn't look like a good option for most consumers.

Actually, most people didn't think the Edsel looked good, period. Ford designers wanted to make it stand out, so they hit on the idea of a vertical grille. The thing is, a car's grille has a specific purpose: It allows air into the engine bay to keep the engine cool. In order to keep the Edsel running, that vertical grille had to be enormous, which made the entire car look silly in the eyes of critics and consumers.

Ugly, overpriced, overhyped, poorly made and poorly timed, the Edsel was made for only two years. In the end, the failed program cost Ford $250 million [source: Carlson]. The "car of the future" is now a cautionary tale in business classrooms, though there were actually a few winners in the case of the Edsel. That flop of a car is now a rare collector's item. Relatively few cars were built between 1958 and 1960 (when production ended), and Edsel convertible models can fetch as much as $47,000 [source: Jedlicka].