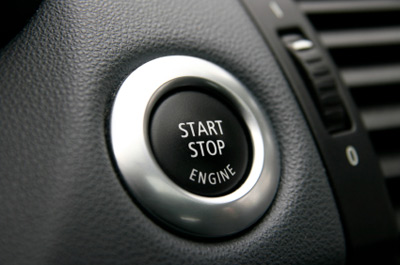 You shouldn't try to steal someone's Porsche, but if you do, here's a tip: the ignition is on the left side of the steering wheel. It's an odd placement for most people -- just ask all the would-be Porsche buyers who've been embarrassed on test drives -- but it's a nod to Porsche's racing heritage. In racing, every second counts. With a left hand ignition, drivers can start the car and shift into first gear almost simultaneously, allowing them to get going that much faster than the competition.

But what's faster than turning a key (and easier than doing it with your left hand) is push button ignition. A number of production cars are using this racing technology, which starts the car at the touch of a button, not the turn of a key. There are a number of variations to the push button systems. BMW, for example, has drivers insert the key into a slot before pushing the button -- this makes sure that the driver is actually intending to start the car. Others, like Infiniti, have an electronic fob that communicates with the car. When someone carrying the fob approaches the car, the car doors are instructed to unlock -- no more fumbling with your keys. When the car detects that the fob is inside the vehicle, the button is activated and will start the car when pushed -- similar to many race cars.

We don't want to keep you in suspense any longer than necessary. Read the next page to find out the everyday car technology that ranks as number 8 on our list.

Time to drop the hammer, Harry, and talk about car racing in popular culture. Whether its street racers in "The Fast and the Furious," Cole Trickle in the Mello Yello Car, or even "Herbie the Love Bug," the glamour and speed of car racing has provided plenty of fodder for popular culture.