The Design of City Car 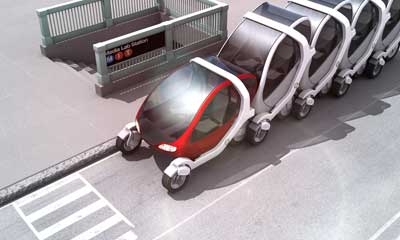 The City Car may feature such high-tech features as customizable paint jobs at the push of a button.
Franco Vairani/MIT Smart Cities group

You've just arrived at a train station and need to drive several blocks to a job interview in the city's financial district. You swipe your credit card at a City Car rack, wait for the front car to unfold, climb aboard the vehicle and enter your destination in the car's computer. A warning message flashes across the screen to tell you that other City Cars have encountered delays in that part of town due to road work. The vehicle runs a few computations and suggests an alternate route.

This is just one example of how the City Car's onboard computer, driver interface and inter-vehicle communication system may one day help make drivers' lives a little easier. With access to the latest maps and traffic information (similar to a GPS system) and constantly updated information from other City Cars, the vehicle's computer system could be the equivalent of riding with a veteran taxi driver.

This technology could also play a role in protecting the driver from harm. The vehicle could keep track of other City Cars and prevent accidents by warning if one vehicle's coordinates come too close to another's. The City Car design team also hopes to implement other groundbreaking safety features, such as soft, robotic "fingers" that fold up from the sides of seats to clutch drivers in the event of an accident. Revolutionary "liquid" materials may also play a crucial role. These materials would allow the cabin to change from a hard structure to a soft, shock-absorbent consistency upon impact during an accident. For more information on this technology, read How Liquid Body Armor Works.

From clever bumper stickers to custom vinyl, vehicle owners put a great deal of personality into their cars. While the idea of shared cars may seem like the complete opposite of individuality on the road, City Car designers hope to allow drivers to express themselves in a very unique way. The City Car design may implement a technology that allows you to change the vehicle's color scheme at the push of a button. Thin, programmable displays would cover both the exterior and interior of the vehicle, making many of the car's aesthetic qualities as customizable as a computer desktop.

And this means more than just decking out a City Car in your favorite sports team's colors. All the gauges and dials in the vehicle's cab would run on the same technology, allowing users to adjust dashboard displays to meet their needs and tastes. Additionally, City Car's various traffic signals would no longer be limited by bulb placements, but could incorporate the entire vehicle. Imagine if hitting your emergency lights caused your whole vehicle to flash red, or if a right-hand turn signal lit up the entire passenger side.

The City Car represents a possible shift in the relationship between cars and humans, from a commodity you own to a resource you share with the rest of the population. To explore even more concept car designs, follow the links below.