How old is the electric car? 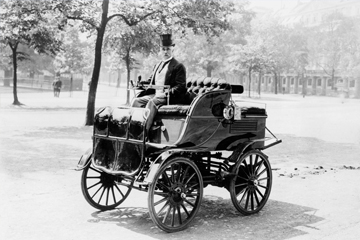 How old are electric cars? Much older than you might think. Here's Roger Wallace perched atop his electric car in 1899.
National Motor Museum/Heritage Images/Getty Images

Electric vehicles (or EVs) are the next big thing — the cars that are revolutionizing the auto industry the way hybrids did less than two decades ago. The rollout of electric vehicle charging infrastructure is happening across the United States, slowly but surely. Some early EV models were considered experiments, sold or leased only in certain states. Plenty of people still worry that an EV won't get them where they need to go on a full charge and that charging might be complicated or inconvenient or leave them stranded. And then there's the issue of the cost: EVs are typically inexpensive to run, but buying one incurs a cost premium up front. (Some states have EV tax breaks that help, though.) No worries, the electric car advocates say, these concerns and complications are typical of new technology.

The funny thing is that electric cars aren't new technology. They go back to the days of, well, the car. Maybe not quite that far back, but pretty close. Early prototypes of electric cars actually date back to the early 1800s, coinciding somewhat with the development of the electric motor and the battery. Engineers in the United States and throughout Europe made plenty of progress, but it took a while for manufacturers to gather momentum.

By the 1890s, there were actually ten times as many electric cars sold as gasoline cars (and there were steam cars competing for a share of the market, too). One of the front-running electric cars was an Iowa-built vehicle designed by a chemist named William Morrison [source: Matulka]. It topped out at about 14 miles per hour (22.5 kilometers per hour), but it was popular, and competed with the likes of Studebaker and Oldsmobile, who were also making electric cars at the time (their gasoline-powered vehicles came later).

Electric cars enjoyed a good run through the turn of the century, but mass production proved to be their downfall. When all cars were hand built, it was a fair fight, but in 1910, the earliest modern assembly lines were introduced. Since gas-powered cars were the first to be put on the lines, their manufacturers had a financial advantage that electric car manufacturers just couldn't beat. Limited electric infrastructure was also a problem (foreshadowing our current EV revolution). Thus, gasoline won out as the preferred source of power, helped along by the immense popularity of Ford's inexpensive and accessible Model T. Electric vehicles were still made, but in very small numbers, for commercial or industrial purposes. A brief resurgence of electric cars occurred again in the 1990s, but they died off again completely before our current EV era began. Now, we've got choices ranging from subcompacts to genuine luxury cars, with plenty of new options on the way. Electric range has improved, and it's easier and more convenient than ever to find somewhere to recharge. The way today's EV manufacturers tout their accomplishments and modern technology, though, it's no surprise that the electric car seems like something completely new.