by Patrick E. George
Next 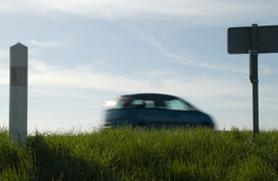 For about as long as cars have been around, the thing to say when a powerful car rolls by has been: "How much horsepower are you running?" But now that we're moving to an age of electric vehicles, that may change to "How many kilowatts does that baby have?"

Both horsepower and kilowatts are measurements of power. Steam engineer James Watt coined the term horsepower back in the 1700s. It refers to his theory that one horse can do 33,000 foot-pounds of work in a minute, i.e. it can move 1,000 pounds of coal (or some other object) 33 feet in a minute.

James Watt is also the reason we have the measurements watt and kilowatt, most commonly used to measure electricity. Obviously, a kilowatt is 1,000 watts.

So when Nissan says that their upcoming LEAF electric vehicle (EV) has an "80 kW AC synchronous motor," what does that mean? Well, an AC motor means an electric motor that runs on alternating current, which allows it to recharge the electric batteries in the car through regenerative braking and other means. Remember, it's the motor and not the battery that actually drives the wheels on an EV like the LEAF -- but that motor is powered by the car's 24 kilowatt-hour battery pack. That motor is simpler and much more mechanically efficient than an internal combustion engine.

So how does an 80 kilowatt motor compare to a gasoline-powered engine's horsepower? To figure that out, we need to do some conversions. To convert kilowatts to horsepower, we multiply the number of kilowatts by 1.34. The result is that 80 kilowatts is roughly equivalent to 107 horsepower.

And while 107 horsepower doesn't sound like much power for the LEAF -- a five-door, five-passenger hatchback -- a similarly sized Nissan Versa has roughly the same horsepower output. However, numbers don't mean everything. Due to the electric motor's flat torque curve and constant power output, the LEAF promises to deliver brisk acceleration around town.