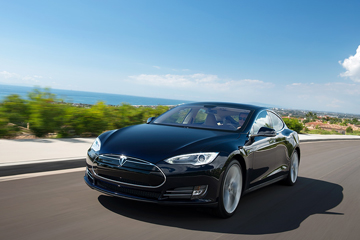 The Model S is an all-electric sedan that Tesla Motors says "sets a new standard for premium performance."
(Courtesy of Tesla Motors, Inc.)

For gearheads, the news is dire: Young people aren't buying cars, they're buying smart phones. Detroit is bankrupt. Electric cars are creeping into the market share one silent percentage point at a time. You better keep that vintage Chevy El Camino with the big-block engine hidden under a tarp in the garage before the flame job police attempt to pry it from your cold, dead fingers, right? I mean, they already killed the Humvee. What's next? Twelve-cylinder Lamborghinis? These are sad days.

But are they really? If history is any lesson (and it is), we're probably headed back to the good ol' days of the automobile. In the early 1900s vehicular propulsion was a free-for-all, with gasoline-, electric- and steam-powered cars all vying to be the most popular. Gasoline-powered cars went farther and faster; electric-powered cars were clean and touted as being safe for lady drivers; and steam cars, well, they had a readily available fuel source. In the big metropolises like New York City and Boston, the market was split roughly into thirds, depending on what people fancied and how they elected to use their newfangled automobile.

The same will likely be true in the near-ish future. The truth is, no one is going to take your El Camino away from you -- but even you have to admit that it's a gas hog. Collectors and automobile enthusiasts will likely stop commuting in their gas-powered toys and use them on weekends instead. After all, no one wants to pay more for fuel just to commute back and forth to work than they make in a day. People will probably take stock of their vehicle usage and then buy and drive accordingly. A lot of people will realize their range anxiety is nothing more than a phantom -- though not a Rolls-Royce Phantom, despite a recent experiment to electrify that luxury beast. So yeah, there'll definitely be more all-electric cars on the streets -- but not every car. At least, not until we get our nuclear-powered flying cars. Then all bets are off.

Author's Note: Will all vehicles eventually be all electric?

I used to work for a magazine that covered vintage sports and muscle cars -- Ferraris, Corvettes, Alfa Romeos, Cisitalias, Superbirds -- the whole bit. The panic in the eyes of the guys (and they were almost all guys) who loved these cars at the mention of a hybrid drivetrain, let alone an all-electric vehicle, was a lot like a horse in a barn fire. If they didn't panic, they laughed. These are the guys I think of when I ponder the future of electric cars. As all-electric vehicles get more stylish and more fun, these guys are going to realize that the only way they can afford to fire up the old Ford Fairlane for a club meet on Saturday is to drive an EV to work the rest of the week. You don't have to be a Birkenstock-wearing tree-hugger or futuristic nerd to understand the practicality of a weekday EV that justifies one's weekend vintage car racing habit. That is, if one has such a habit.