How Much Does It Cost to Charge an Electric Car? 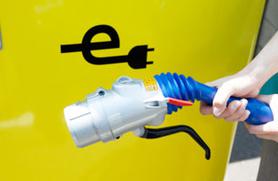 Will fueling up electric cars cost as much as gasoline cars?
ICHIRO/Getty Images

Electric cars that run only on power stored in their batteries -- no gasoline required -- are going to hit the mass market in the United States over the next few years, thanks to the likes of Ford, Nissan, Mitsubishi, Mini and a slew of others with plans on the drawing board.

There are a few money measures to consider with electric cars, like the fact that early advances in technology are often more expensive, though federal and state governments are lining up to offer incentives to electric car buyers. There's also the fact that many of these cars, like the Tesla Roadster, require a designated charger installed in your garage for quick and efficient charging.

But what, exactly, is that charging time going to cost? Sure, it'll be cheaper than a gallon of gas, but is your electric bill going to go through the roof when you park your green grocery-getter in the garage?

Nope, it won't. Plug In America estimates that it will cost $2 to $4 to fully charge an all-electric car. For that price, the EVs that will be hitting the market soonest, like the Nissan LEAF, will travel about 100 miles (160.9 kilometers). Of course, your mileage may vary -- in a couple of ways. The cost of electricity in your city will affect that price, and the way you drive your EV will affect how many miles you get per charge.

That said, let's do a little math. In Portland, Ore., where electric cars are gaining ground and the local utility is providing charging infrastructure, electricity runs about 6 cents per kilowatt-hour (kWh). The new Mini E, which is still in field trials, uses .22 kWh per mile, which translates to 22 kWh for 100 miles (160.9 kilometers) of driving. And in Portland, 22 kWh will cost $1.32.