What's the correct way to lower your car? 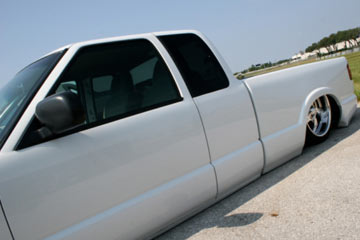 Image Gallery: Custom Cars If you want to lower your truck, there are several different options to consider to lower it correctly. See more pictures of custom cars.
iStockphoto/Thinkstock

There is a guttural and good reaction that takes place at the sight of a low-to-the-ground machine. Wild animals tend to stalk low and crouched to the ground. Jets power down after landing and seem to meld with the hot rise of fog. Lowrider cars rise up with the flick of a switch and then ease down to a hairsbreadth from the pavement.

Going low with a vehicle is a tradition that crosses over into many cultures, and many drivers outside of lowriding lanes take the drop as well. But with so many methods to actually lower a car, which is the correct way?

Before technology caught up, car owners simply cut the suspension coils in order to lower the body of their cars. They might also make cosmetic changes like sheared and reset rooflines, dropped fenders and car skirts to dramatize the look. While many of these body work changes continue, they don't really lower the car itself, only the appearance. Looking cool and low may be as far as some want to go, but how does that affect the car's performance?

Modifying a car to a lower stance can improve handling, speed and control, but only when done properly. Just one drive in a car that is lowered correctly is usually enough to tell the difference in performance. Lowering a car cosmetically, on the other hand, often creates more drag and adds more work for the car, meaning a rougher ride. But there are car owners that don't mind because they value aesthetics over the ride.

So if you're considering lowering your car, the first question to ask yourself is whether your motivation is good looks or a better ride (or both). Knowing your answer will help you figure out how to lower it correctly, depending on your ultimate goal.

Let's roll out the answer with some specifics, next.

Do-it-yourself or hire a pro?

When a well-engineered car comes from the manufacturer, it rides out with parts designed to fit. Car makers design and produce with the knowledge that a flaw in engineering is potentially a safety issue that can lead to recalls, accidents and even insolvency for the maker. Most vehicles are very well thought out, and those that aren't live in the public memory for decades. Keeping that in mind before taking a torch or hacksaw to a suspension component is maybe a deterrent and a motivator at the same time, because it doesn't take much to lower a car badly.

There are some considerations to start with, and in lowering, options can crossover a lot:

One area of lowering where shortcuts are fine -- and even encouraged -- is in the cosmetic areas such as sound, touch and look, which can round out the lowering project.

If lowering is done well and with all balancing factors in mind, it should be a one-step modification. Often, though, less height may throw off the camber, or the even placement of the tires on the road. Or it can throw off the tension of the springs and each new bump and uphill scrape can feel like something is out of whack. Just as in carpentry, where you measure twice and cut once, lowering is best undertaken with forethought and planning. Even solutions that work at first may fall flat with road time and wear. Those original factory calculations and specifications are precise, and after-market upgrades slip into downgrades without planning.

Visualizing what you want or describing how you want the ride to feel can lead some cars straight to the garage, but stopping at the computer or in the library is a good route. Searching on your make and model and what you hope to achieve will yield countless possibilities and more advice than you will likely ever need.

If not, check out the links on the next page for more practical visuals and tips.

Not ready to drop your car or truck? Customized lowrider bikes have an industry with a culture and fan base all their own, too. Lowrider Magazine has a Web site for bike enthusiasts at Lowrider Bicycle, where you can also find information on making lowrider model cars, which have a following and place in the car culture, too.