How does piston shape affect combustion? 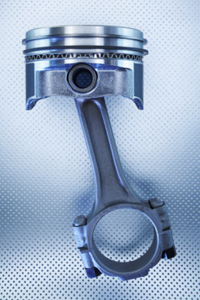 When we're talking about engines, we often say something is a "four cylinder" or a "six cylinder." But what does that really mean exactly? For those not familiar with engine basics, a "cylinder" is the space in which a piston travels, and pistons are vital parts inside most engines driven by internal combustion.

Basically, gasoline and air mix together in the combustion chamber above a piston. When an electrical spark ignites that mix, it creates a tiny explosion that drives the piston up and down. That movement turns a crankshaft, which is ultimately responsible for driving a transmission and the wheels.

As you might expect, pistons are subjected to more heat, pressure and movement than nearly any other engine part. They have to be built for durability. With engines constantly evolving, carmakers keep finding new ways to built better pistons, including altering their size and composition.

The piston is at the heart of how an engine creates motion. Adding pistons to an engine or making them bigger increases displacement, which means the engine generates more power because it burns more gasoline.

Let's first talk about different piston shapes. Pistons that are elliptical, or shaped like ovals, become more circular when heat is applied. This allows for improved sealing when the cylinder meets the combustion chamber for greater efficiency. Some pistons are tapered or conical, which lets the piston move more freely regardless of how much heat is present. Others are "barrel" shaped, which is smoother and generates less noise and harshness as it moves [source: University of Windsor].

Next, let's learn more about how the top of a piston affects performance, fuel economy and engine longevity.

As engines have evolved over the years, pistons have evolved with them. They're getting shorter and lighter, and use smaller skirts — the cylindrical "body" of the piston. Newer pistons are often made of aluminum alloys comprised of more silicon than in the past. This improves resistance to heat and reduces thermal expansion [source: Engine Builder].

One of the biggest advancements in piston technology is the use of different piston "tops" or "crowns," the part that enters the combustion chamber and is subjected to combustion. While older piston tops were mostly flat, many now feature bowls on top that have different effects on the combustion process.

The piston bowl is primarily used in diesel engines. Diesels don't have an ignition phase, so the piston crown itself may form the combustion chamber [source: CDX]. These engines often use pistons with differently shaped crowns, although with direct injection becoming increasingly popular, gasoline engines are starting to use them as well.

By affecting the air/fuel mixture, you can achieve better and more efficient combustion, which leads to more power. The bowls have a variety of different shapes — some are also designed to optimize fuel economy.

For more information about piston shape and combustion, follow the links on the next page.