How the Personal Air and Land Vehicle (PAL-V) Works 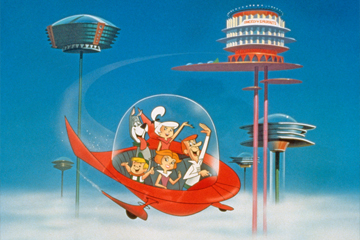 The Jetson family waves as they fly past buildings in their spaceship in a still from the animated television series, "The Jetsons," circa 1962.
www.PAL-V.com

George Jetson had it easy: he was good-looking, had an attractive wife, well-behaved kids, a dog that could sort-of talk, a robot maid, video phones and, the pièce de résistance: a flying car. (Side note: Don't you wonder what had happened to the Earth on "The Jetsons" that made everyone live so far above the surface? What was actually down on the ground? Trash? Floodwaters? Zombies? On second thought, maybe that question is a little too heavy for a kid's show. Anyway, back to the flying cars!)

While the automobile has given people freedom to travel long distances relatively quickly and comfortably, we always want more. Faster cars, alternative fuel cars, cars that integrate apps from our smartphones and cars that are able to drive themselves are either for sale now or on the horizon. Flying cars, long the dream of everyone in a traffic jam and a basic mode of transportation for everyone on "The Jetsons," are another automotive dream. As it turns out, however, being able to soar over a miles-long backup on the freeway isn't the pipe dream it once was. With the invention of the Personal Air and Land Vehicle (PAL-V), we're all getting a bit closer to our own flying cars.

Of course, we'll all need $395,000 to do it, but what does money matter when you're talking about a flying car?

The PAL-V One is a combination car and helicopter that's built by the PAL-V company. The PAL-V One seats two and can be driven on the road and into the air — you don't even need a pilot's license. Light, high-tech materials help make the PAL-V airworthy, and an innovative design helps it transition from the road to the air in under 10 minutes [source: PAL-V Specs; PAL-V Flying]. That beats sitting in traffic any day. Let's take a look at why the PAL-V is a good idea and how it works both on the ground and in the sky. If you found your way to this article while stuck in traffic, though, save it to read for later. Your Earth-bound car can't drive itself, so eyes on the road, pal.

The Challenges of Building a Flying Car 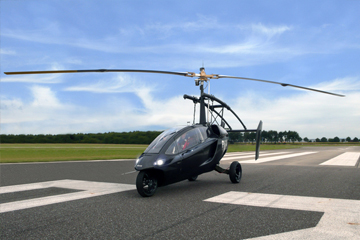 A flying car like the PAL-V One needs to be just as good on the ground as it is in the sky.
www.PAL-V.com

The PAL-V sounds great to the average person (It's a car! It can fly! You don't need a pilot's license to drive it!), but building a flying car presents unique engineering challenges that aren't easily overcome. Take the amount of force a car's suspension — the system that maintains the contact between the tires and the road during driving — needs to take. A car's suspension maximizes the car's handling abilities and absorbs bumps and imperfections in the road. Most car suspensions are engineered to absorb about 2 Gs worth of bumps [source: Brown].

Now, you're probably thinking that planes don't need strong suspensions because there aren't a lot of bumpy roads up in the skies. You're forgetting, however, that planes need to land at some point, and those landings can be harsh. Plane suspensions need to be able to take up to 4 Gs of force. No problem, just beef up the suspension and boom, flying car, right? Nope. While a car can take some added weight with no big problems, plane design is all about keeping weight to a minimum. Every ounce matters. So if you add weight for the suspension system, you're going to have to take it away from somewhere else — say, the sound-deadening material, frame reinforcements or seats.

Then there's the issue of the wings. If a car has wings like an airplane, it's not going to fit on the road. Parking will also be a nightmare. Folding wings are an option for when the car is on the ground, but wings that fold are weaker than wings that don't, making them not the best choice for flying. Then there's the issue of power delivery. To save weight, you'd only want one engine on a flying car. On a car, the engine sends power through the transmission to the wheels. On a plane, the engine powers a propeller. For a flying car, how would the engine's power be switched between the wheels and the propeller?

When you take all of those challenges into consideration, it's a wonder anyone has ever tried to build a flying car, let alone do it successfully. But the PAL-V company did.

The PAL-V One on the Ground 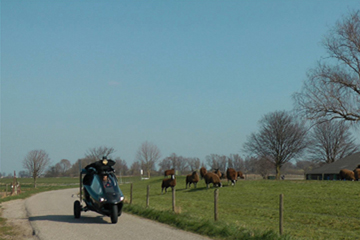 The PAL-V One has excellent drivability when it's on the ground.
www.PAL-V.com

Anyone who's been on a 737 as it taxies to the gate knows that planes aren't the most agile things when they're on the ground. That's because planes are built for doing their best work in the air. Driving along on the ground is an afterthought. A flying car like the PAL-V One, however, needs to be just as good on the ground as it is in the sky.

Compared to a 737, or any other conventional plane, the PAL-V has excellent drivability when it's on the ground. It drives like a sports car, thanks in-part to its unique cabin layout. Most cars have a two-plus-three layout: two seats in the front, three seats in the back (SUVs and minivans, as well as some subcompact cars, have different seating arrangements). The two-plus-three arrangement is comfortable and stable on the road, but it's not all that sporty, and it also adds a lot of weight to have all of those seats and people on board. The PAL-V has a one-plus-one cabin layout. The passenger sits behind the driver, similar to two riders on a motorcycle. And even though the PAL-V uses a wheel to steer like a car, it leans like a motorcycle in tight turns.

When it's on the ground, the PAL-V's engine makes 230 horsepower, and goes from zero to 60 miles per hour (97 kilometers per hour) in less than eight seconds. It has a top speed of 112 miles per hour (180 kilometers per hour), and it gets 28 miles to the gallon (12 kilometers per liter). On a full tank, you can drive it 750 miles (1,207 kilometers). Weighing in at just under 1,500 pounds (680 kilograms) when empty, the PAL-V One makes use of carbon fiber, steel and aluminum components [source: PAL-V One; PAL-V Specs]. As revolutionary as the PAL-V is, however, we're beginning to see those performance numbers and lightweight, high-tech materials in conventional cars, too. So why are we talking about the PAL-V? Because of what comes next: its ability to fly.

The PAL-V One in the Air 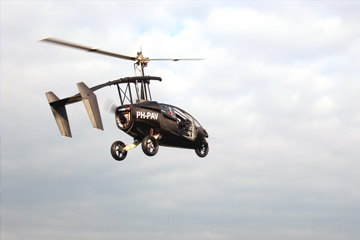 Sure, you can get a high-tech sports car or a funky-looking motorcycle. That's relatively easy. But making those things fly is a different matter altogether. When it's time to take off, the PAL-V has it covered. To transition the PAL-V One to the air, you simply have to fold out a small tail section, which in turns raises a rotor above the passenger cabin. Using a rotor instead of full-on wings is how the PAL-V solves the problem of fixed or folding wings — with the former taking up too much space on the ground and the latter being too weak in the air. Because of this, the PAL-V is closer to a helicopter than it is to a plane [source: PAL-V Flying].

However, though the PAL-V looks like a helicopter, it can't take off vertically. It needs 540 feet (165 meters) of runway to take off and 100 feet (30 meters) of runway to come in for a landing. In the air, its fuel economy drops to 9.5 gallons per hour (36 liters per hour), and it can only fly up to 4,000 feet (1,219 meters) high, but that's plenty high enough to avoid traffic jams, Another bit of good news: you don't need a traditional pilot's license to fly it, though many regions will require you to have a sport pilot's certificate. Of course, we've seen how unsafe cars can be on the road, and taking one up 4,000 feet is enough to unnerve some drivers. If your car breaks down, you just have to make it to the shoulder. When you break down in the air, you're going to cover the 4,000 feet to the ground very rapidly. However, because of its design, the PAL-V One can maintain lift even if the engine stalls, because its rotor will keep spinning. It likely won't be the smoothest landing, but any landing you can walk away from is a good one.

If you want your own PAL-V One, you'll not only need to have a big check ready, you'll also need to get in line. Right now, they're only being sold in the Netherlands, and the PAL-V company is only able to make about 150 vehicles per year, with deliveries starting in 2016. Until then, you can either learn to enjoy traffic or just give up and take the train — where you can stream old episodes of "The Jetsons" and dream about your very own flying car.

I was sitting in traffic the night before this article was due, cursing the fact that I didn't have a PAL-V so I could fly home and finish writing it. Then again, I was sitting in traffic in Boston, and giving Boston drivers flying cars does not seem like the safest idea. Though the PAL-V One can't hold the entire Jetson family, and flying cars really don't make much sense for most people, the fact that materials science, aviation and automotive design have come together in one (very expensive) package is just fascinating.