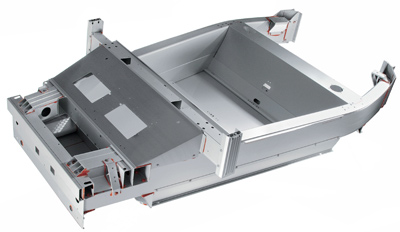 The Elise's light weight is achieved through several different methods. It starts with the chassis, which is made of aluminum. Formed of bonded aluminum sheets in a tub shape, the Elise chassis only weighs 150 lbs (68 kg). The Elise's weight is driven down a bit more by the use of lightweight carbon fiber on sections of the undertray.

Next, the Elise is a very small car -- a two-seat roadster with only a small stowage space for luggage. The short wheelbase (90.5 inches/230 cm) also keeps the car's profile trim and compact, and the stock Elise only has a cloth roof.

Finally, Lotus kept the Elise's weight down by stripping away many of the comforts that are considered mandatory in a high-priced car. We'll discuss the Elise's interior in greater detail later on, but for now, it's sufficient to say that the inside of this car is spartan. Much of the aluminum tub is left exposed, and many of the interior panels have large holes drilled through them to further cut weight.

In the next section, we'll take a look at the Elise's cornering and stopping ability.

Using aluminum instead of carbon fiber for the chassis is one of many factors that makes the Elise ($40,000) so much less expensive than supercars like the Enzo Ferrari ($652,000) and the Porsche Carrera GT ($440,000).

With the new Elise, Lotus has pioneered a new way of designing cars. The aluminum-tub chassis of the Elise is the first part of Lotus' Versatile Vehicle Architecture (VVA) format (Road and Track, May, 2004). That same basic chassis has been made into the larger and more expensive Lotus Esprit, a four-seat car in the $125,000 range that features more space, more weight and lots more horsepower. Lotus is also developing an "in-between" car with 2+2 seating (two standard front seats plus two small seats in the back) and front-engine design.