How the Jeep Hurricane Works

Two HEMIs in a Jeep 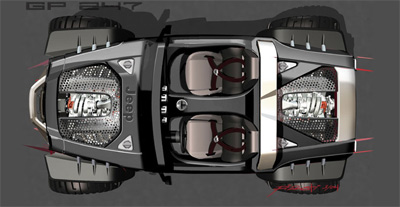 For many automotive enthusiasts, the HEMI engine represents the pinnacle of American muscle. So what could be better than putting a HEMI in a Jeep?

Fuel efficiency isn't always the first thing on a Jeep enthusiast's mind, but cruising along with two HEMIs roaring might seem wasteful. In keeping with the concept of combining responsibility with excess, Chrysler used its multi-displacement system in the Hurricane. This system allows half of the cylinders in an engine to be deactivated when the vehicle doesn't need as much power. When you're pushing your way through thick mud or climbing a rock face at a 50-degree angle, all 16 cylinders (eight per engine) are cranking out power. If you're charging along a trail, it might only need 12 cylinders, so four cylinders in one of the engines are deactivated. Driving around in the suburbs doesn't demand a huge amount of horsepower, so another four cylinders are deactivated, leaving just eight cylinders running. And finally, staying at highway speed (65 mph/97 kph or so) can often require less than 20 hp, so one of the HEMIs is turned off while the other runs with only half of its cylinders. All of this cylinder juggling happens without the driver's input -- it's all automatic and barely noticeable.

The Hurricane's power is delivered to its solid split axles through a central transfer case that incorporates a mechanically controlled four-wheel torque-distribution system (see the next section for an illustration). In this system, there is a driveshaft for each wheel instead of one central driveshaft. If you've ever seen a powerful vehicle under heavy acceleration, you might have noticed that the frame seems to twist or that one of the tires lifts off the ground. This is due, in part, to the rotation of the driveshaft: The direction of the spin delivers downforce to one side but lifts the other side. The Hurricane's split-axle design applies a downward force on each wheel individually, giving it great traction under acceleration.